Episode 10 comes full circle, right back to where we were in episode 2, with plenty of recycled footage to boot. Normally, that sort of stuff really annoys me, but I was cool with it this time around, because we’re now watching it knowing the full back story. For example, when I was first watching ep 2, I thought Yomi had been gone for a while, but knowing that these battle scenes happened right after she escaped the hospital (same night), adds a lot to the story. 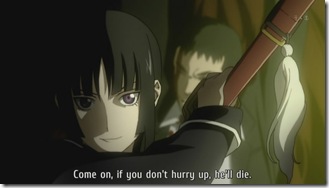 The difference between this episode and episode 2, is it focuses on Noriyuki’s part of the tunnel, and his showdown with Yomi. I don’t know if he really believed he could save Yomi, but I think he thought that she could at least save herself. That she was still “there,” so to speak. So when she threatens to kill Sakuraba, Noriyuki chooses to believe in her to the end, ultimately costing Sakuraba his life. I think it’s easy to blame Noriyuki in this case, but I don’t know if I can. This goes back to knowing that the events in this episode happen immediately after Yomi leaves the hospital. If there was a long stretch of time in between her disappearance and her carnage, you can say, yeah, enough time’s past to come to terms with what you have to do. But knowing that just hours ago, Yomi was still Yomi, wouldn’t you believe in the person that you’ve fought with, that you’ve known, that you loved? I guess that explains the “Will you kill someone you love, because of love” tagline.

It was also nice to see how Yomi escaped from the explosion (Rangure), and Kagura being saved from imminent death thanks to her dad.