Last season there was a lot of focus on Mako-chan, this season there’s been a lot on Touma.

Part 1: A girl and her… cheese lemon custard chiffon pie?

Kana comes home to find that Haruka has cooked her favorite dessert, a cheese lemon custard chiffon pie. I’m not sure exactly what that is, but I could sure go for some right now. But she walks into the living room to find that Touma has some pie of her own, and steals a bite. Touma, apparently extra-sensitive since the pudding pilfer from last episode, responds with a flying headbutt.

Later, Kana mentions a story in which Minami brother #1, Akira, thanks her for helping Touma to be more ladylike (hang onto that thought). Kana then rationalizes that Touma probably wants to be more like a boy, so they should raise her as such. Which leads to a bizarre, inu-Minami-ke scene, in which inu Kana and inu Chiaki fight for supremacy and the right to turn Touma into the next Chippendales idol. But Haruka stops the madness with bachou-like ruthlessness and sends Kana and Chiaki to their demise.

This sequence was sort of meh for me. But it picks up when the Minami brothers enter the scene. 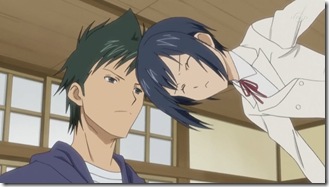 Touma goes home one day to find that Natsuki’s pissed that she’s late. The cream stew has gone cold! (But why don’t they just warm it up Akira wonders smartly.) Touma decides she’s had enough of his jibber jabber and responds with another flying headbutt. Unfortunately for her, Natsuki’s way more hardheaded than Kana – in more ways than one. Later, at her other Minami home, she laments her plight. After which Haruka shares how Natsuki told her that he thinks Touma is acting too boyish and is going to treat her like a boy in return. Kana devises up a master plan and gives her a picture to defuse Natsuki’s anger, and prove Touma’s girlishness. (Why not just stop being a bakayaro instead, Chiaki wonders smartly.) Later, Touma goes home again, and it’s ruined the meat and potatoes! The horrors! But this time, she wields the picture like a blade, and stops Natsuki in his tracks. So what was it? Oh yeah, it definitely proves someone’s girlishness. 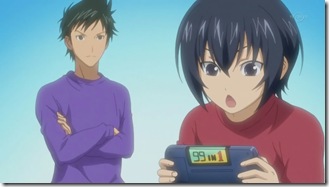 I love how the Minami bros. are sitting around talking about what to get Touma for her birthday, while she’s sitting in the room with them not paying attention. Turns out she’s gotten some suspect gifts from them in the past. The best selling book, Onii-chan Love. A galgae. And a broken handheld game system. No wonder Touma’s going around giving everyone flying headbutts. I’d be pissed off at life too.

But the bigger story is the introduction of gaze-reading Banchou #2, and Natsuki’s budding love interest, Hitomi. She’s a cute character who thinks she can read Natsuki like a book. And it turns out she can. But she seems to have a problem with different pronouns. So when she catches Natsuki gazing longingly at Haruka, she mistakes it to be for herself. Which leads to her rejecting Natsuki and running away. I’ve never heard the seiyuu before (Ayaka Saito), but I liked the voice she used for Hitomi. Cute, and slightly kiddish, but not overwhelmingly so.

Part 4: Maturity is all about umbrellas 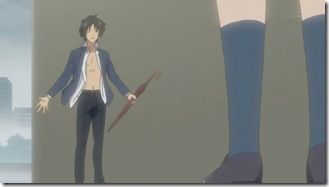 Man, it’s sort of tough writing a review of a story with no plot. But anyway, we get some HOSAKA ACTION! And he does not fail to deliver. Hitomi tracks down Haruka’s friend Maki, to learn how to be more mature like Haruka. But Hosaka stops by soaking wet, while holding an umbrella, who corrects her, saying what Haruka actually wants is someone to dote on her. And at Maki’s request, tells her why he’s wet, and how he went to get the best umbrella to win Haruka’s love. Not surprisingly, Hosaka = best part of the episode. You may as well etch that in stone, because it’s basically law.

Hitomi meanwhile takes the lesson as maturity = umbrellas, and tries to win Natsuki’s love by giving him her pink bunny umbrella, which he sort of freaks out at.

So long winding story back to the beginning. What does Touma get for her birthday? An umbrella. A black umbrella at that. Worst birthday present ever. But I couldn’t help but laugh when the Minami bros. all start clapping in congratulations. Those guys are the most well-meaninged, clueless brothers I’ve ever seen. No wonder Touma has issues.

Next week: I think I saw a peek of Mako-chan. Which means our other genderbending trap is back! It’s been a while!