Mako-chan is finally back in his usual dunce role. Although his part to play was pretty subdued this episode. 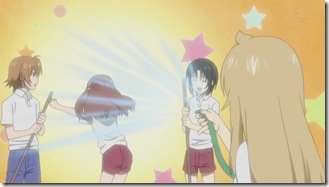 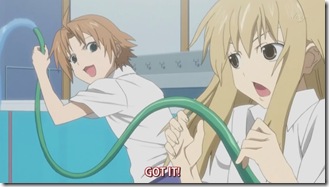 Chiaki’s apparently not a big fan of the pool because she can’t swim. So she impedes the cleaning efforts by taking control of the hose, rationalizing that “she who controls water, controls the pool. And she who controls the water, controls the cleanup.” I’m not sure that’s the best plan for delaying the pool opening, but whatever. She dares her three dunce friends to think of a way to get the hose from her. Amazingly, they succeed, outsmarting her in the process. Having been intellectually pwned, Chiaki turns to her devil side, and whomps Mako, taking the hose by force. This leads to a funny scene like something out of an eroge, in which Chiaki sprays Uchida and Yoshino with the hose. At first they’re all like “No!!! I’m getting all wet!” then next thing you know, they’re dancing under the water, screaming, “Yes! Soak me like you mean it!” 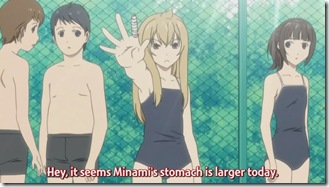 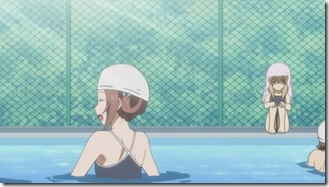 Chiaki continues to ponder her inability to swim and decides the best course of action is to raise her body’s water percentage in order to float. At least, that’s what I gathered. Her logic was so wacked, I’m not sure I followed. Anyway, all that does is give Chiaki a chubby looking tummy, which she decides is best hidden by diversion – a bandaid. On her finger. Another questionable decision. Clearly, no one buys the gambit. But that just leads Yoshino and Uchida to tell her to take it easy and not swim while injured. I guess finger boo-boos can be dangerous maladies. So in the end, Chiaki doesn’t get to go in the pool. And while I think that’s what she would’ve wanted in the first place. She seemed pretty miserable in the heat. So maybe not. Anyway this whole segue was a little too random and unfunny for me. This seemed more like Mako-chan logic than Chiaki logic.

Part 3: The Kana-Riko-Fujioka oblivion triangle is back! 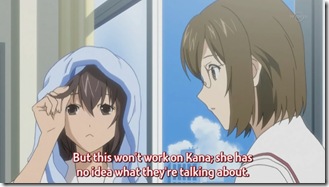 One of my favorite subplots from season 1 that was completely missing from season 2 was the Kana-Riko-Fujioka love triangle that everyone, besides Keiko, was oblivious to (now all they have to do is bring back Sensei and Ninomiya-kun, and they’ll hit a trifecta, with this, and the Minami brothers already in the fold). This may have been my favorite part of the episode, actually, because it was so predictable. Kana invites Riko and Keiko to the pool. Riko then sneakily tries to get Kana to invite Fujioka to the pool. Meanwhile, Fujioka is within earshot, moaning about how he wants to go to the pool. And in the end Kana decides to disinvite them and invite Chiaki’s friends. Classic! Short but sweet. 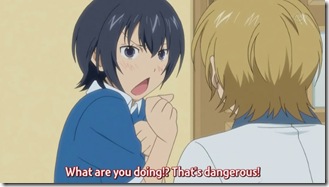 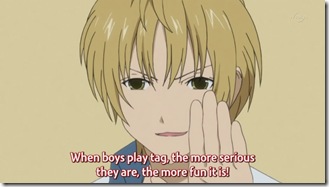 Isn’t it funny that guys are willing to do things like slap other guys in the butt, but would never do that with girls? Similarly, when the gang plays the most chill game of tag ever, after having pissed off Kana for not playing tag with her, Fujioka decides simply tapping Touma on the shoulder is not good enough and chooses to tag her in some choice spots. If Touma’s ever revealed as a girl, I’m not sure who’s going to be more traumatized by that point, Touma or Fujioka. My bet is on Fujioka. Anyway, this was pretty hilarious. I think the first season director loved Hosaka and Haruka. I think the second season director loved Mako-chan. And it’s clear the third season director loves Touma. I guess that’s one benefit from cycling directors, they all have their own favorites.

Mako is getting better and better at the cross-dressing thing. And Haruka wasn’t even around this time. He’s starting to border on trapalicious. That’s when you know you’ve crossed a line.