If the writers decided to take the few characters they’ve pretty much ignored for the past 2-and-a-half seasons and turn them into completely irresistible moeblobs for one episode, what would you say? 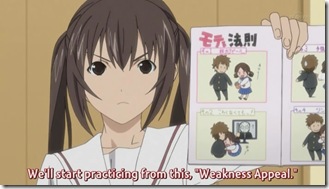 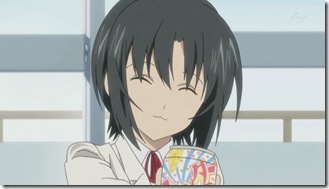 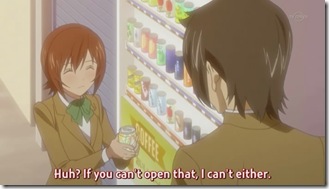 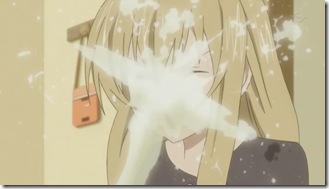 “Weakness appeal.” Does such a thing exist in real life? Because I’ve never noticed it. I’d like to think that I’d find it irresistible, but in reality, I’d probably be like the guy that blew Maki off. In fact, I laughed out loud at the part, because I know that’s exactly what I’d say. Have you tried opening a can? You need strong fingernails man. If you want me to open a jar, that’s fine. But opening cans? That’s woman territory there. My fingernails are much too short for effectively opening cans.

Either way, I think I’m in love with Atsuko. Her performance makes me want to take back everything I wrote above, and open every can across the world so she’d never fail again. Whereas Yoshino failed with a cute smile, showing that she’s still got much to learn, Atsuko came in and showed the difference between a master and a child – it’s the blush and effort that’s crucial in displaying weakness appeal. So good was she, that she drew catcalls of witchery from Maki and Kana, who were momentarily spellbound by Atsuko’s helpless moeblob mastery. 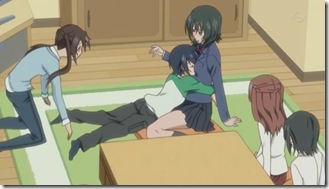 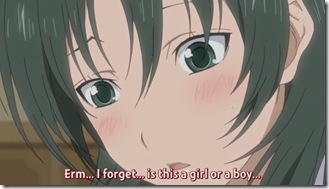 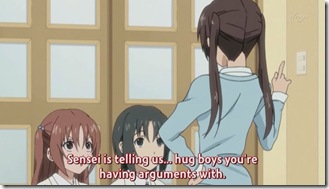 I get Haruka’s friends confused all the time. But I think I got it now. Hayami, loosely rhymes with kitsune, the trickster of the group (plus she’s got those shifty, kitsune eyes). Maki, I always connected her with the scene where Hosaka took off his shirt and hugged a large fish, so she’s easily grossed out. Atsuko was the one that was never around, said anything or did anything. Well now she has two claims to fame. Not only is she the moeblob I’d open all the cans in the world for, she’s the one with breasts that can knock a girl out cold. Touma’s sudden and convenient bout of narcolepsy, the subtle tension from Atsuko realizing that she didn’t know if Touma was a boy or girl, and Kana sensei’s subsequent lesson of the day, had me rolling. 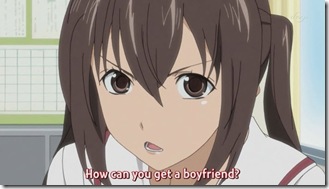 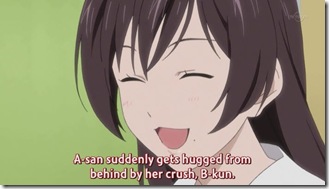 I felt shades of bored Haruhi when Kana was sitting at her desk, looking out the window, wondering if someone would tell her something interesting. What sort of havoc would the two of them wreak if they got together? Hmm, I wonder…

Anyway, I like how Kana warped Keiko’s mind when she categorically rejected Keiko’s response to her “How can you get a boyfriend?” question. Which then led to a downward spiral of hilarity as Keiko sucks the joy out of Riko’s life, points out Fujioka’s domino fail, and then returns to destroy Kana at her own game. You don’t wanna mess with Kana. Seriously. Even when you’re Kana. A nice moment for Keiko though, considering she typically gets like 3 lines a season.

Part 4: The return of Hosaka 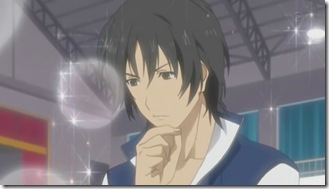 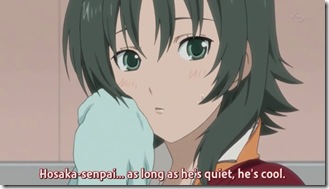 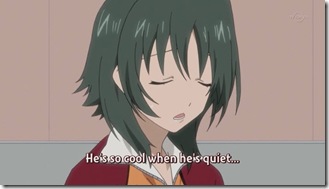 Hosaka spends most of this segment acting normal and looking cool, silently winning Atsuko’s wavering heart (easy to do when Daisuke Ono’s voicing you). Of course, who could resist the curry youkai? But when he overhears Hayami mention that Haruka might join the volleyball team, it sends him into fantasy land. And while it was a pretty tame hallucination by his standards, his “My serve was too powerful” line just cracked me up. But still, Atsuko can’t deny the inherent coolness of the curry youkai.

Well, keep hope Atsuko! Since Asread does such a terrible job animating Haruka, all you need to do is be yourself and get some more airtime and soon Hosaka will see you for your moeblob glory.

One Reply to “Minami-ke Okaeri, episode 8 – Ode to the forgotten”