Because they’re either tipping off the “final battle” way too early, or this show isn’t really 24 episodes (hooray!). If that were really the case, it would be the best thing to happen to the show since the promising first episode. 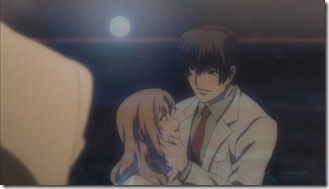 So let’s see, what happened this episode… Akane’s root wants to become a Master Root, so daddy will love her, and so she can shack up with Kuro’s bro, Reishin. Mass murderers are in at Kaioshin Co.

Meanwhile, Steiner, Excel, Yakumo and Kogure storm the Kaioshin headquarters to face off against Reishin. Reishin turns out to be tougher than they thought and nearly blows them away and escapes easily. Luckily for the crew, Excel had her “Hexa Wall” up to protect them (lol @ the name). We got not only one lame synchro sequence, but two. Argh, my head.

Meanwhile, the Konbini voyeur has some tricks up his sleeve and strikes up a deal with another potential bad guy, named Raiga, who’s not happy that Reishin’s trying to play God. Turns out the Kobini voyeur may not be a Root, but it doesn’t mean he can’t join in the killing fun. Kaioshin Co. – worst company ever. Even worse than AIG.

Over in Okinawa, Keita’s fake mom appears out of nowhere to engage in a heart-to-heart. Could she be a multi-dimensional character? I mean, in the flashback, she seemed to be pretty horrified when she crossed paths with Keita’s mom. Guilt, perhaps? No, actually, it turns out she’s a prick too, as she unleashes a tera soul suck on Keita.

Out in some forest somewhere, the two little runty kids apparently were on good terms with this Raiga guy. Keyword were. He knocks both of them out and apparently kidnaps only one of them for some reason.

The girl runt chases down Kuro looking for help. As they go out to look for the runt’s brother, Hiyou just happens to drop by to pay them a visit. Oh, he’s a mass murderer too, as he wiped out the runt kids’ tribe. Everyone’s a mass murderer these days. He easily dispatches with Kuro, who can’t seem to land a hit to save her life anymore. 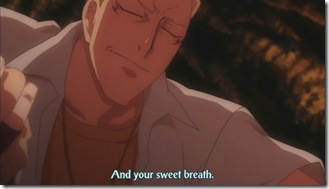 Just when you think all hope was lost, Keita rises from the dead. Somehow, his mother’s tera soul suck was not a knockout blow. How does he do this? Perhaps he has the Reiji Maigo within him. Anyway, the tables have turned, because it’s his turn to play the hero. He completely blows away his fake mother with the power of his ring, and races against time to save Kuro from a bizarre raep scene. Cut to ED and the scenes for next week, which hinted the magical words “final battle!”

There are a bunch of shows that I can’t wait to end, Gundam 00, Tales of the Abyss, To Aru no Majutsu no Index, Haruhi-chan and Churuya-san. But most of all, I want Kurokami to come to an end. Because the story is becoming increasingly nonsensical. Random people seem to dropping in at the most random of times. There’s no progressive plot development. Kuro went from being a tough, spunky kid to a complete failure as a fighter. And the rest of the characters are for the large part, predictable and one-dimensional: the bad guys are very bad, and the good guys are very weak.

The one saving grace, ironically, is that thankfully, Keita has improved. I’ll give the writers credit for that. He’s no longer a loathsome, idiotic spineless jellyfish. He’s graduated up to solid harem leader: mostly harmless, generally clueless, but with some fighting spirit. And with that superpowered ring, I don’t even know why he needs Kuro anymore. He could just go around blasting everyone with that little bazooka.

I’m crossing my fingers that this show will end at 13 episodes. It seems like they’re rushing towards the ending. But I don’t get the impression that an additional 11 episodes would’ve done them any good anyway.