I wish… asread could have spent the time and money to make the design and animation even merely average. I’ve gotten used to the terrible quality of the animation. But every now and then I can’t help but cringe at an elongated chin, or a malformed head or a criminally thin body limb. Even Mako-chan got the shaft this episode, and it usually looks like they spend a little extra time on her/him. Whatever. It’s not a big deal. Onto the Kana-heavy episode. 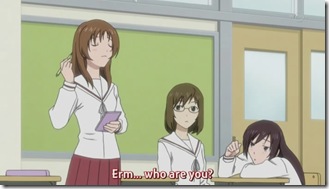 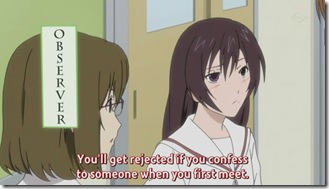 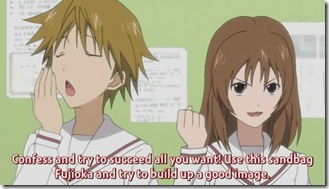 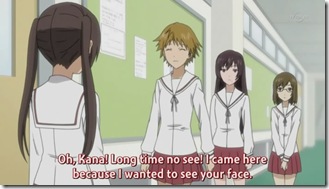 Riko’s stressing out like usual, depressed about her inability to get closer to Fujioka in the handful of episodes she’s been in over the past three season. And just when you thought we were going to get the same ole, same ole, Minami-ke introduces a new character. Two actually. Will these two girls get any future airtime? Or will they be forgotten like moe banchou Hitomi? Probably the latter since there’s only two episodes left, but perhaps the producers are prepping for a fourth season? Hmm…

A round of applause, let’s give a warm welcome to Observer Hiroko. Long time fan, first time character. She’s a big fan of the Kana-Riko-Fujioka broken love triangle. She’s tired of watching in the background and wants to step into the picture. And lucky for Riko, she roots for the underdog too. With her sidekick and partner in crime, Yuu – standing in as the doppelganger Fujioka – she gives Riko an opportunity to engage in some confession practice.

Positive reinforcement is key to building up confidence. However, things go terribly wrong when mid-practice, Yuu breaks out of character (or more aptly, breaks into character) and cheerily greets Kana, giving her full attention. Unfortunately, this practice session is too much like reality for Riko to stand, and any hopes for a direct confession probably went out the window. LOL @ Keiko, who’s the true observer in all of this. She’s so clued into all of this, it’s funny seeing her in contrast to all the other clueless parties. 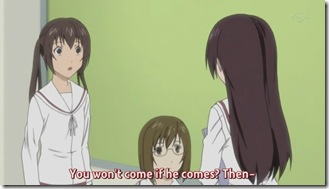 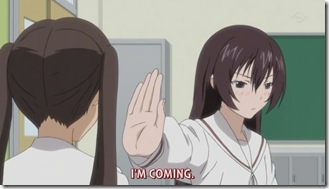 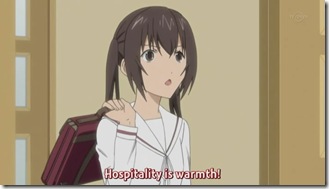 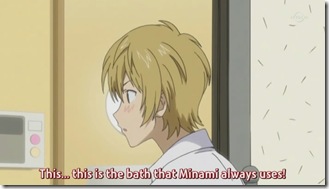 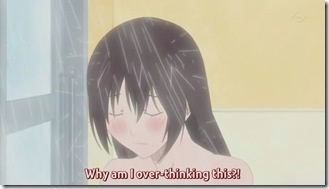 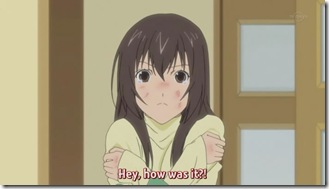 It’s always nice to see characters learn from prior experiences. Like when Kana mistakes Riko’s incredulousness, and is just about to probably disinvite everyone, Riko jumps in to stop her and clarify the situation.

Kana decides that true hospitality is warmth. Thus, she has big plans for her study-mate guests. Hospitality – Kana style. Or in other words, a hot bath with red hot peppers. When I saw Kana step in, I immediately wondered whether if it’d be painful. If anime reflects real life, then it looks like it sure does. Kana’s reaction to the hot pepper bath was cute though. Fortunately for her guests, they stuck their nose up at Kana’s hospitality, and chose to take showers instead. Leaving their most loving host to suffer by jalapeno.

So is taking a bath at a friend’s place part of Japanese culture? Is sharing water as well? I’m sort of like Keiko. I hate showering in foreign bathrooms. And hell if I’d share someone else’s bathwater. Although, it did make me think… if sharing a straw is considered a secondhand kiss, what would sharing bathwater be considered? 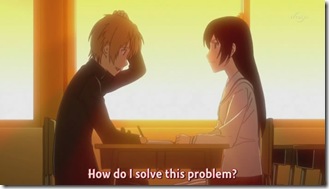 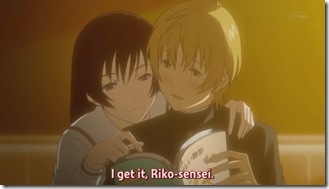 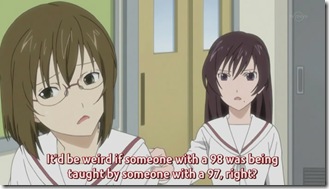 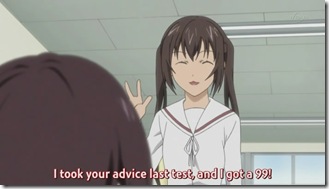 I’ll be honest, I did the math in my head. If Keiko got a 100. Kana got a 99, Fujioka got a 98, Riko got a 97, and those two random girls got a 47 and a 46, then the minimum amount of questions on the test (assuming each question was worth 1 point) had to be 100. So? That’s an incredibly long test from my experience. That’s pretty hardcore. I’m rather shocked that Kana got a 99, even with help. I don’t know if they ever alluded to her actual grades before, but I always assumed she was a below-average student. Mostly because she never studies.

The biggest loser here? Riko and her now-dashed sexy sensei dreams. It would be weird if someone with a 98 was being taught by someone with a 97 right? Yeah, Riko, that is true. But as one opportunity is removed, another arises, as she could allow herself to be “tutored” by Fujioka. She doesn’t command the same level of respect, and she couldn’t pull the seductive sensei routine, but she could pull the desperately longing student routine. Alas, she may have to wait for a future season to think that plan through. 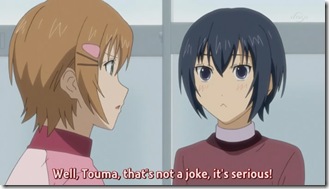 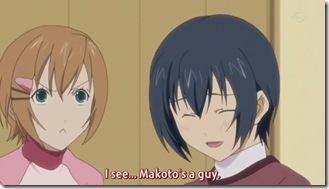 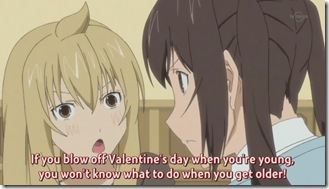 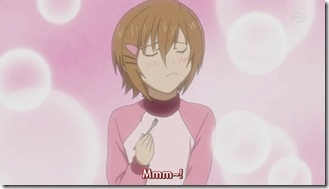 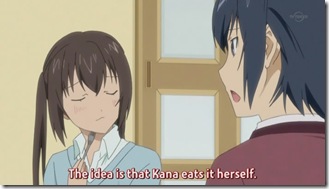 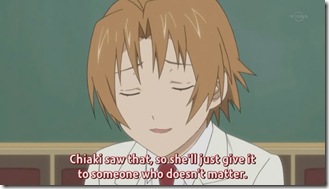 Valentine’s Day is right around the corner and the girls start talking about chocolates and who they could give them to. Meanwhile, Kana just wants to play Othello, except no one seems to want to play. By stroke of genius, she devises a plan to sucker Chiaki into making chocolates using Othello as an analogy. So in the end, Kana plays Othello (or Touma suggests she does, since we never see her do so), and gets chocolates to boot. Ultimate winner? Kana. Ultimate loser? Well, there’s got to be someone right? In this case, Mako-chan takes the bait, as Kana teases Mako-chan about who she’d give the chocolates to. Mako-chan concedes and gives her chocolates to Chiaki. Kana tells her Chiaki all about practice and she should just give the chocolates to anyone within reason.

But what Makoto wasn’t supposed to know was that Chiaki and Mako-chan knew that some of the chocolates fell on the ground. So you’d only give them to someone you really didn’t care about. And who could that be? Oh, I wonder.

This episode lacked the lulz of last episode, and some might consider it more boring, but it felt more Minami-ke-ish to me: more subtle humor, more realistic situations. As much as I liked season 1, the major LOL moments were the Hosaka moments. Otherwise, it was the type of show that’d just make you smile the whole way through, and that’s what I got from this episode. With that said, as the season winds down, it looks like the writers are running out of angles to pursue. Their main angles so far have been the gender-bender stuff and the love triangle stuff. And while you can keep that fresh for a long time. You can only do that if it goes hand-in-hand with some plot/character development, which obviously, Minami-ke isn’t really about.

I do hope one of the last two episodes focuses on Haruka. She’s really gotten the shaft for the past two seasons.