This was the first solid episode of Kurokami in a very long time. Coincidentally, there was no action here, and the writers simply used the time to flesh out the relationship between Keita and the konbini voyeur. You’d think it’d be a recipe for boredom, but the story was surprisingly engaging, not overly outlandish, and we at least got an episode off from having to watch the stupid transformation sequences, and Kuro’s terrible fighting “skills.”

Keita and the Konbini voyeur used to be best friends back in the day. “Best” is a relative term, because I didn’t get the impression that they were that close. But Kobini voyeur was apparently a real misanthropic, arrogant jackass, the type you’d expect to go on a school shooting frenzy, and Keita was his only friend. So I guess by that definition, they were “best” friends. 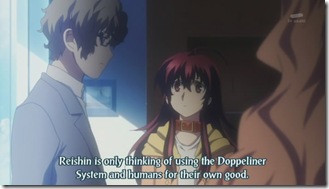 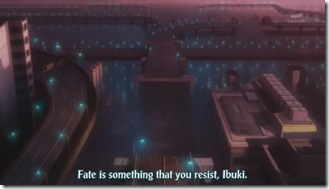 What is interesting is as they strike up a “friendship,” Konbini voyeur learns of Keita’s mother’s death. This sparks him to do some research whereupon he learns of the doppeliner system and crosses paths with Reishin. Meanwhile, Konbini voyeur is the one who tells Keita that fate is to be resisted, but ends up “dying,” which drives Keita to become the hapless fatalist that we met at the start of this show.

In reality, it was the Konbini voyeur’s sub who ended up dying – whether by choice or by force unknown – which gave KB the opportunity to “fake” his death and team up with Reishin to learn more about the doppeliner system. But he learns that Reishin has only his own goals in mind and plans to use humanity for his benefit. This leads KB to his now mutinous path.

Plenty of backstory, fast forward to present day, KB still sees Keita as a friend, and wants to team up with him to save him from his substitute fate. I couldn’t really get a good read on KB. Obviously he’s no good guy, but he doesn’t seem like a true bad guy either. A strange breed indeed, considering how black and white all of the other characters are. But he appears to be honest with Keita and Kuro, and Akane to some extent, and when he suggested a non-evil way to keep Keita alive (by monitoring where the other sub and root were vs. say killing them), it made me think that perhaps he’s closer to the light side. Later events then swing the needle the other way. 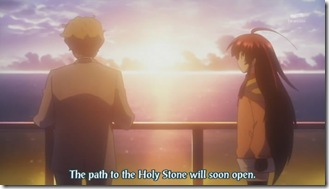 Kuro overhears Akane’s confession to Keita and takes off on her own to track down Reishin and the opening to the Holy Land when she runs into Makana, the little girl squirt, who enlists Kuro’s help to find and save her squirt brother, Kakuma. Unfortunately, Kakuma is soon sacrificed by Raiga in order to open the door to the Holy Land. I’m still not sure where Raiga fits into this, he’s also one of those rare gray-area characters, because it seems he disagrees with Reishin’s vision and is partnered with KB for the eventual double-cross, but killing a defenseless kid doesn’t exactly put him in the “good guy” camp.

Also, Kuro doesn’t exactly have a bright, strategic mind. I don’t know what sort of plan she has, but considering she’s been getting whomped across the floor by just about everyone she’s faced, I can’t imagine what she thinks she can do against her brother, who’s probably the toughest opponent she’ll face. 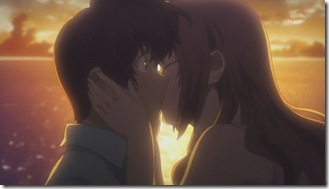 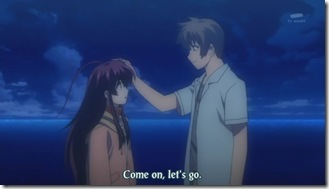 Luckily for the I-have-no-plan-Kuro, Keita tracks her down to go fight Reishin together. Not that Keita has a plan either, but at least he brings a little more firepower to the party. Plus, he’s glowing, having received a confession/goodbye kiss from Akane. The stage is set for the last battle in this hopefully 13-episode series. 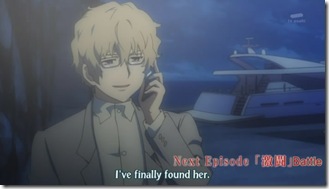 I know Keita and KB used to be buddy, buddy, but if I were Keita I wouldn’t trust anybody at this point. Especially someone who’s deceptive enough to fake his own death. Leaving Akane behind was an incredibly stupid decision. I mean, Keita couldn’t have brought her to the ensuing knife fight, but I would’ve took her somewhere secret and kept her completely out of sight. While KB shows some concerns in warning Akane, he then turns around and narcs her out to the Kaionji CEO. Interesting turn of events however. Akane is not the sub, as we thought, and as KB tells her, but actually the root, while the Kaionji CEO is the real sub. This means someone’s going to have to get their hands dirty if they want to take out Akane and get the minus root benefits.