While Higurashi Rei #1 was a welcome reintroduction to all of the characters, it was pretty much a silly, throwaway story. However, episode 2 comes back with the creepy, foreboding vibe that Higurashi no Naku Koro ni delivers like none other. This is probably a good as time as any for me to mention that if you haven’t seen either Higurashi or Higurashi Kai, it’d be foolish to keep reading.

So it turns out episode 1 didn’t happen in a vaccuum, and it didn’t take place in a parallel universe, as we catch up with the gang heading back home after Keichi’s ~hauu sea bear humiliation. However, things take a quick turn for the twisted, when Rika, enjoying her newfound freedom for the first time in her life, barrels down the road, straight into an oncoming truck. 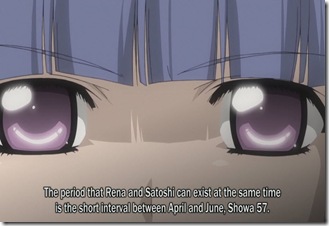 When Rika comes to, she’s shocked to find that Satoko’s brother, Satoshi, is back. She quickly realizes that her hard fought freedom is for naught and she’s returned back to her nightmare. Nearly the whole episode focuses on Rika trying to figure out which nightmare she’s returned to. Seeing that Satoshi and Rena are around at the same time, she’s able to narrow it down to a date.

But later, when she’s taken to the Takano clinic to get her head checked (not for insanity, but because Satoko apparently hit her on the head with a ball), she learns that there is no Takano. At least not the Takano she remembers, the Irie clinic is gone, and the doctor in charge doesn’t seem to have a clue what the Hinamizawa syndrome is. But what really blows her mind is when she observes that the date is Showa 58. Or a year after the neverending nightmare she endured.

Meanwhile, as Rika heads back home, she gets a feeling that this world is not like the worlds she’s become accustomed too. Something about it seems off… Her suspicions are further confirmed when she returns to the classroom. No Maebara Keichii. Otherwise known as the key to breaking the cycle. Without him, all previous scenarios have come to particularly horrific ends. But is the game still on?

She walks home with Reina and tries to probe further. She learns that Rena is still Reina. Her family’s never left Hinamizawa, her parents aren’t divorced, and she seems mentally sound. She also learns that Satoko and Satoshi, both seem to get along well with her surrogate father, who is apparently not the drunk, child abuser that Rika’s come to know.

Rika gets more and more perplexed by this world, which appears to be completely different from all of the previous worlds she’s known. When she learns that even the dam project is continuing and that everyone in the town will be evicted, she presses even further. Asking questions that… well, no sane person would. She learns that while there was some resistance early, the town’s leadership quickly came to terms with the government. And to ensure that Oyashiro-sama wouldn’t be ignored, Rika’s father had come up with an alternate plan that would keep him from being angered. Finally, Rika gets right to the point and pointedly asks Rena about the dam murder incident. 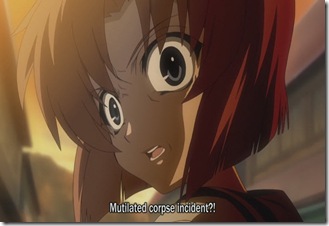 What Rika actually got. 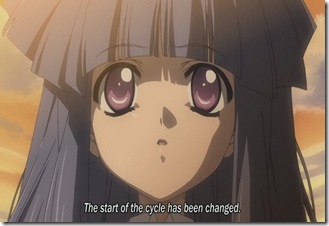 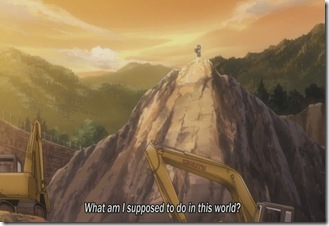 The episode ends with Rika, lost and confused. Unsure if she’s been freed from her nightmare, but also unsure about how to proceed in this new, strange world, where everything seems too normal to actually be normal.

There’s no other show that’s able to create the atmosphere that Higurashi creates. The creepy, foreboding sense that there’s evil lurking beyond every corner, carnage and despair behind every motive. And while nothing major happened during the episode, I was still on the edge of my seat wondering when this facade of normality would break. I imagine Rika was thinking the same, and that’s where I think this episode succeeded most. As Rika was trying to piece together the puzzle, the show invites us to do the same. Dates. People. Family situations. Nothing matches the previous patterns, but when you’ve spent more than a lifetime experiencing the worst things possible, you can’t help but think that this world is just screwing with you.

And that’s where I really felt for Rika. She spends a lifetime, more than a lifetime – I think it was over a 100 years – living the same few week period over and over, only to get killed in the most gruesome ways possible, over and over – sometimes by your own hand. You finally break out of it. And just when you think you can enjoy the freedom you earned. BAM. You’re back into the nightmare. If the previous lifetimes of death weren’t enough to drive you insane, this just might do the trick. It’s like Sisyphus pushing the rock to the top of the hill, only to have it roll back down the other side.