Rule #2: if you’re a regular soldier without a gun or superpowers, you might as well stay home, lest you get swept up in one of the inevitable maelstroms.

Obligatory screenshot of armies getting swept up in the fun

Not only did Nagamasa die ingloriously, he finds out that it was all a setup – the relationship, the marriage with Nobunaga’s sister Ichi – all fiendishly plotted to weaken his clan’s military might. Admittedly, Ichi did fall in love with Nagamasa, and while things may not have gone exactly to plan because of that, let it be known that she didn’t do anything to save Nagamasa in the end. Of course a lot of that has to do with the guro-loving Mitsuhide. Who we finally got to see in action, albeit briefly, in a weak, halfhearted fight with an injured Masamune. 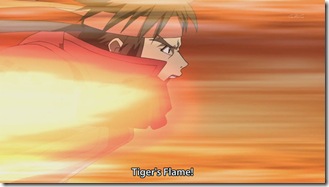 Elsewhere, Hondam has been won over by Sanada’s fighting skills (Sanada’s quite a popular guy) and challenges him to a duel. Why Tokugawa let him do that in the middle of a major battle that they were losing – I don’t know. Again, the fight between Sanada and Hondam was short and half-hearted. No new tricks, nothing too over the top. It felt as though Production IG realized they needed to include some action, but wanted to pull punches on all the battles. At least we got a couple nice insert songs.

We do finally get to see Kouhime in her dazzlingly killer glory. Again, a short battle in which she eliminates a few of Tokugawa’s soldiers and then kills off Hondam, but this was the over the top action I’ve come to expect from Sengoku Basara. When she tossed away her pistols, I was thinking why would she do that just to pull out a sword? But lo and behold there was no sword. And instead, out from the realms of her dress, she pulls out a freaking minigun and starts gunning down everyone. Die quickly? Damn straight. Then she kills Hondam with a land nuke or something. Craziness. Although, considering all the major fighters can fly, explode in balls of flames and toss hundreds of soldiers at a time, I’m sort of disappointed to see them get gunned down so easily. Are you telling me Masamune couldn’t have blew those rifleman away in a tornado of swords?

With Azai gone and Tokugawa heavily weakened, not to mention losses to Kenshin, Masamune and Takeda’s troops, Nobunaga pulls the reigns and leaves the field, I guess to plan his next move. Ultimately setting up the final alliances between Kenshin, Takeda, Tokugawa (why would anyone want his help, he hasn’t done a thing?) and Masamune. It also looks like the next episode or two will be spent rounding up the final 2 players of the game, Mouri and Chousokabe.

Back at the skull cave, Mitsuhide gets censured and threatened for deviating from the plan and acting out on his own. It was great to see Nobunaga drinking sake from one of the many skulls around him. I wouldn’t have expected any less. Too bad all the blood was cleaned off of it thoguh. Everytime I start taking SB a little too seriously, they’re able to go over the top with something to make stop doing so. Mitsuhide proves that he’s sick in the head to the very end, getting some sort of strange pleasure from Nobunaga’s threat. I do hope he does get off’d by Nobunaga. I’d like to see him do something really evil, something really violent.

All in all, this was sort of a weird episode. I don’t think it was directed well. It was all over the place. From the battlefield fights, to awkwardly-timed duel challenges, to Hondam’s demise, Masamune’s retreat and Tokugawa’s non-stop crying – there were too many random things happening. In many ways they’re still setting up for the final battle. But it seems like they’re tossing in just enough action to whet the appetite. I imagine we have about 3 more episodes of exposition and halfhearted battles, which isn’t ideal, but something I can forgive if they go absolutely over the top and pull out all sorts of new tricks for the last couple episodes and battles.