The big shocker this week is not Ritsu’s unexpected turn towards the serious, but the revelation that next episode is the season finale. Originally, K-ON! was expected to go for a 13 episode season. It remains to be seen whether that info was just wrong, if they plan on ending the show with a filler episode unrelated to the main storyline, or if it ends up being a DVD special episode (let’s hope not as bad as the Kannagi DVD special episode).

Unfortunately that means they’ll be ending the season with their second school festival performance and not the Budakan performance that I was hoping they’d end with. But that may actually be a blessing in disguise because that clearly sets things up for a 2nd season – not to mention they’re only halfway through their high school careers. 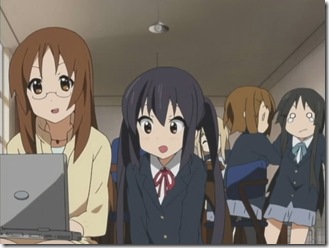