I mean the above title in the most complimentary of ways, as this was the best episode of the show so far, and what I consider the official start of mindfuck season. 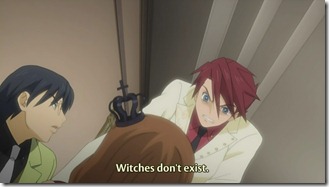 You can break this week’s episode into a few different parts. The first part begins with Battler, George, Jessica and Natsuhi finding the murders in the parlor, and Maria singing to herself in a corner. Battler confronts Maria about what happens, but only gets stories about Beatrice and witches, which he refuses to believe in. We finally see Battler at his wits end, and increasing frustration/fear/anger at the murders, and Maria’s bizarre reaction to them. Nice job by Daisuke Ono. I haven’t heard him let loose since maybe forever. 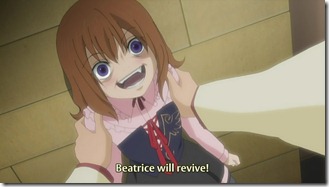 This week we get a few ~uu’s from Maria, but the constant switching between her cute face and her psycho evil face is really throwing me off. Is she schizophrenic? Homicidal? Possessed? Just plain weird? It seems like they use the evil face every time she talks about black magic and Beatrice, but even in her happy state, she’s so nonchalant (maybe even gleeful) about the deaths and the resurrection of Beatrice it’s hard to tell what’s going on in her head. Does she want Beatrice to revive just because she’s obsessed with black magic? Or is there something more than that going on?

As George and Battler interrogate Maria, they suddenly realize that Natsuhi’s no longer in the room with them. According to Maria, she left the room holding a letter. We don’t see her read the letter, but we do see her call out for Beatrice to challenge her. However, Beatrice makes short work of Natsuhi, and Jessica, Battler and George break out of the room only to find Natsuhi falling down from a gunshot wound to her head.

Now I’ll get to this later, but if we’re to believe that all the murders were committed by a human, it’s interesting to note that she’s been carrying a what looks like a sawed-off shotgun. There’s a clean gunshot wound in her forehead which isn’t what you’d expect to see if we’re to believe that Beatrice somehow turned Natsuhi’s gun on herself. Although later, when Battler uses the shotgun to shoot the painting of Beatrice, we don’t see the expected shotgun spray and it’s a pretty clean single bullet, so it’s possible I’m reading too much into this. 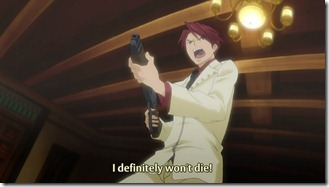 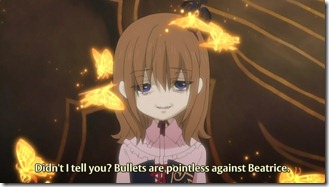 Anyhow, now with only the three of them left (plus one crazy loli), Battler makes a challenge to Beatrice of his own, vowing not to die. However, Maria informs them it’s too late. The game is complete. Beatrice’s resurrection is given.

We then get a cutaway screen to some time in the future where a couple of fisherman retrieve a bottle with a note that Maria had written and released, asking the reader to reveal the truth. This would suggest that perhaps Maria isn’t necessarily a willing sacrifice for Beatrice.

We now enter the twilight zone. The screen tells us that the murders were never resolved, but suddenly we find Battler, George, Jessica, Shannon, Kanon, and Maria sitting in the parlor, talking about the recent murders as if they’d just played a game and took the wrong routes to the bad ending. Everyone seems eager to attribute the murders to Beatrice, which raises Battler’s suspicions, questioning them why they’re so willing to assume that the culprit is a witch, just because they can’t fathom a human being able to do everything. Interesting perspective there. Battler’s clearly cut more from the Scully mold than the Mulder mold.

Battler refuses to acquiesce to the rest of the group and then challenges the witch to show herself. At which point she does, surprising Battler right off his feet. 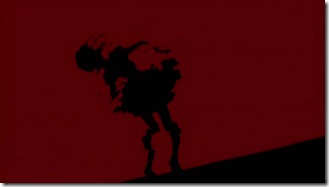 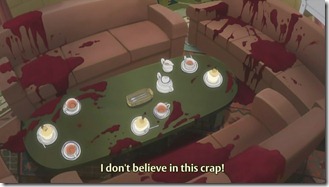 A very compelling battle of words follows between the two, with Battler vowing that he didn’t believe in witches, and that he’d find a human possibility for each of the events. Beatrice meanwhile, seems to be amused by Battler’s stubbornness and willingness to fight her. Games are always more fun when there’s competition, and Beatrice appreciates the challenge that Battler may provide – being strongly resistant to magic, and a tremendous skeptic apparently. She then engages in a bit of psychological warfare, allowing the rest of the group to relieve their deaths and crumble into flesh and dust right before Battler’s eyes. However, Battler refuses to concede to her, vowing to find out how all this trickery is happening, attribute it to humans and erase her from the world.

Honestly, I didn’t know what was going on in this scene. For a moment, I thought it was really strange that they’d start the 2nd arc in the middle of an episode, and even stranger still that the 6 of them would have a clear memory of everything that had happened. Like I mentioned, it was as if they were replaying moments in a game, and figuring out where they went wrong. Apparently, they were in purgatory, which makes everything make sense, and would’ve been nice for the show to let us know.

There’s also something a bit contradictory about Battler refusing to believe in Beatrice, since a.) he’s talking to her and she’s right in front of his face, but also b.) because judging by what he says "half-existence", "illusions", "trickery", it doesn’t necessary sound like he believes that Beatrice doesn’t exist. I interpreted his refusal to believe that Beatrice exists, to be specifically in reference to the murders committed. That he believed that somehow, humans committed the murders, not a witch. Otherwise, it would be as if he was challenging a phantom, or a voice in his head. 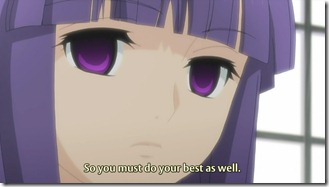 After the parlor fight with Battler, we see Beatrice retreat to a tea room with a few empty seats, and one Witch Bernkastel in the room. There’s an uneasy relationship between the two witches, with Bernkastel admitting that she’s unable to get a read on Beatrice. We also learn that Beatrice has the power to kill someone "endlessly" (Oyashiro-sama?), while Bernkastle can create miracles, as long as the possibility isn’t zero (Rika? Hanyuu?). They also refer to another witch, Lambdadelta, who I assume we’ll see at some point, having the power to kill anyone "without fail" (are we to assume that Beatrice could fail in killing someone?).

Once Beatrice leaves the room, Bernkastel continues talking to either herself, us the audience, or Battler, saying that she’s not "our" ally, but will offer some help to keep things interesting (since boredom is the only thing that can kill witches, apparently). This seems to suggest that the witches are simply toying with everyone in one complex game, that may or may not span over a couple different shows as well.

I never quite understood Bernkastel’s role in Higurashi (if she had one), but my understanding of Bernkastel is that she’s sort of an amalgam of all the Rika’s that lived and died.

There’s an interesting discussion in the MAL forums where some of the posters talk about Umineko pitting one camp of fans being anti-mystery (or believe that witches committed the murders) vs. another camp being anti-fantasy (follow Battler’s explanation), and there being constant challenges to both sides as the arcs continue. For me, it’s hard for me to go as far as Battler and deny the witches’ existences. I mean, we clearly see them, they talk, they walk, they may kill. But I want to side with Battler, because I think you can find a way to attribute all the deaths to a human being (or multiple). Tough to say. But things just got very interesting. My head is definitely spinning right now.