There’s not a whole lot to say about the episode besides a recounting of the events. Compared to the first arc, the first episode of the second arc takes it’s time and focuses on providing some character development for Shannon, Jessica and to a lesser degree, Kanon and George.

We see Shannon and George enjoying a trip to an aquarium in Okinawa. The two are blissfully enjoying the unlikely relationship between an Ushiromiya heir and the family’s servant. George thinks it’s magic. Shannon doesn’t disagree. 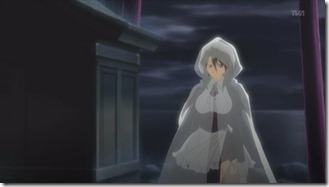 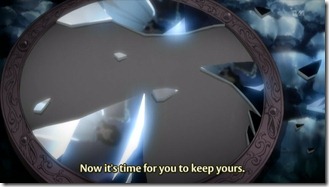 In a quick flashback, we see Shannon heading to the island bluffs, smashing the special mirror and calling for Beatrice to come and fulfill her promise.

Further back in time: October 1984

Shannon is swayed by George’s kindness, while Jessica nearly spills the beans when the three of them are in the garden. However, Shannon’s "let’s be friendly" time is cut short when George’s mother, Eva, arrives to inform him that Kinzo would like to speak to George about his marriage meeting. As the two leave, Eva gives a word of warning to Shannon: furniture are meant to be just that – furniture (not in those exact words).

Perhaps the same day, Shannon approaches Beatrice’s portrait and laments how she’s been cursed with a heart that’s not allowed to love. Beatrice then surprised Shannon by showing up and offering an opportunity for her to achieve her wish. Beatrice Beatrice instructs her to breaking the magic mirror, so that Beatrice can get her powers back and help Shannon. However, Shannon declines the offer, concerned that breaking the mirror could lead to calamity.

However, Kanon comes to mess with the show and is surprised to find Beatrice trying to make a deal with Shannon. He lashes out at her, but before Beatrice can punish Kanon, Shannon pleads with her to forgive Kanon. Beatrice, having taken a liking to the respectful maid, obliges, and then gives her a butterfly-shaped brooch. A special gift that will make Shannon’s wishes come true if she chooses to break the mirror. 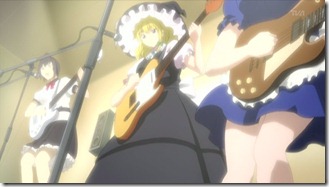 So is this a new reality, or the predecessor to the previous arc? There’s nothing that happens in this episode which suggests that it couldn’t be directly connected to the previous arc. George’s proposal would make sense from a timing standpoint. And suddenly Kanon’s outrage at Beatrice in the boiler room makes much more sense – as does Jessica’s horror at seeing Kanon die. I wonder why Shannon and Kanon would be the only ones who could see Beatrice. And I also wonder where Kanon got his "furniture" fetish. What in the world happened to that kid? I’m very eager to see where the next episode takes us.