I think I’ve mentioned before, but the hardest part about writing these Sora no Manimani posts is keeping the screenshots to a minimum. I usually try to restrain myself, but I decided to go buck wild for this one.

Cute Mii-chan is cute. The episode starts off with a short history on how the wandering lolicon turned high-school teacher first met little angel Mii-chan. I found it extra amusing that Mii-chan’s backpack was a pig with wings. 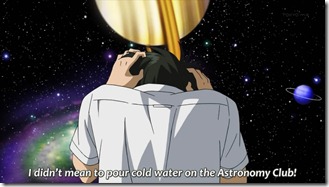 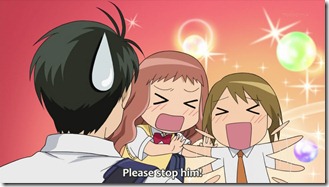 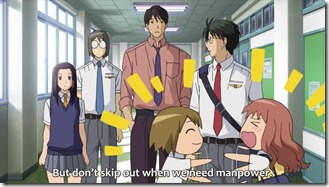 Meanwhile, we then see Saku cursing himself for mentioning the Astronomy Club obligation. Because the potential plans to make Mii-chan miss him seemingly blows up in his face, when Mii-chan enthusiastically encourages him to do so, seeing him as a messenger for the Astronomy Club. This scene sort of reminded me of the scene in Nodame in Paris, where Chiaki "breaks up" with Nodame to make her miss him and she responds with a flying drop-kick, then tells him to drop dead. Not quite as epic, but still pretty funny. And the chibi Mii-chan x Hime fight was equally the most cutest and greatest chibi scene I’ve ever seen in my life. I also got a kick out of lolicon Sou-nii sensei herding all the girls to himself. When this show’s funny, it’s drop dead hilarious. 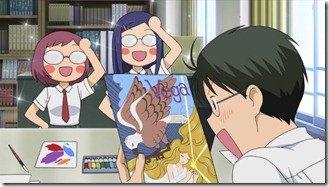 With no other choice than to help the Literature Club out, Saku comes across Fumin’s right and left hand women. A couple of eager beavers who churn out a magazine cover in about as much time as Saku takes to describe a thought. They may have a lucrative career in the future as sketchers for the police.

The group decide to spend their meagre savings to buy materials to build the planetarium, but we get our first glimpse at The Melancholy of Mihoshi Akeno. Could it be that Saku’s plan actually works?

After helping out at the Literature Club, Saku heads back to the Astronomy Club classroom and is disappointed to find that everyone has gone home. But then he’s startled as Mii-chan surprisingly shows up at the clubroom to get something she left behind. An abrupt and awkward scene follows, in which Mii-chan leaves in a hurry before letting Saku speak. I really thought they were going to leave the scene here, but then…

BAM! MII-CHAN x SAKU FLAG TRIGGERED! Mii-chan’s doorway stalk/glomp hug was too cute. And lest it got too heavy and awkward, I loved how they then showed Mii-chan coming to her senses and caught by other club members and Sou-nii in an awkward half embrace. 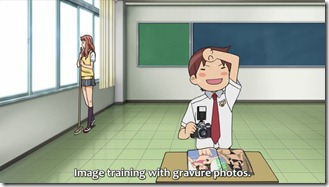 Meanwhile all this is happening, unbeknownst to fluffy Hime-chan, who’s grilling Edogawa about Saku. I have to say, I’m a Mii-chan shipper 100%, but I really like Hime-chan too. I actually like her design better, as Mii-chan is a bit too plain and her appeal is strongly dependent on her glomp-friendly nature (although no one has a better chibi design than Mii-chan). With that said, this is the toughest shipping choice I’ve had to make since CC vs. Kallen in Code Geass. If Mii-chan was a (fluffy) hair short of epic awesome, I would’ve fallen for Hime-chan. Plus Haruka Tomatsu! Although much props to Mii-chan’s seiyuu Kanae Itou.

I’d also like to point out how insanely ridiculous (and hilarious) it was to see Edogawa go nuts practicing taking pictures of gravure photos. I don’t think I’ve ever seen anything like that.

Lol, I bet Sou-nii had a harem of his own in high school. His "talk" with Saku about astronomy and Mii-chan was really nicely done. And I liked seeing the quick flashback to what Mii-chan told him. Even though she’s a year older than Saku, she really is a little kid at heart. 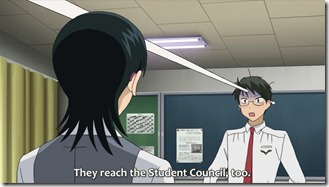 Meanwhile, the rumors of after school shenanigans between Mii-chan and Saku have spread, so the other combatants are out full force. Fumin even goes as far as outright asking him to join the Literature Club, although she then claims she was joking (yeah right). Fumin and Saku have a nice discussion, and I actually thought Fumin was pretty likable in this episode. She got to show a little more depth than the super TSUN TSUN, little dere dere pattern we’d seen before. Now I wonder if we’ll ever get background on Sayo-chin and the Astronomy Club president (does he even have a name yet?). Time’s running out on those guys.

Saku then runs into Hime, waiting for him outside the school. I don’t know if this is supposed to be her goodbye gift, but she gives him a diary covering all that they did during the past few days that Saku’s been helping the Literature Club, before running away. The slim chances of a Hime ending seem to be becoming fainter and fainter by the day. (Although I would support a Sora no Manimani – Hime chapter OVA. How come Clannad gets to have all the fun? Everybody just dies and cries in that show. Can we get a little bit of laughter in our relationships?) 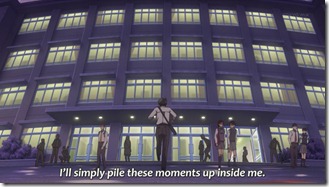 The episode then ends beautifully with Saku reflecting on living in the now and running back into the school to help the Astronomy Club members. The sentimental moments in Sora no Manimani are just so well done. As I loved the music during this scene and Saku, like always, has some pretty good things to say.

Well, the Mii-chan x Saku flag has indeed been triggered. Now I hope they don’t screw it up and pretend like nothing happened in the next episode. Still, with 5 more episodes to go, there’s plenty of time for some twists and turns.