The most important part of getting to this episode was trying to avoid even the slightest semblance of any spoilers – be it the post title, or the preview sentence you see in Google Reader. But I knew some shit had hit the fan when even Divine over at Random Curiosity was posting about it. Needless to say, I’m very glad I was able to stay out of spoilers way. So this is a warning, because the spoilers start here.

The newly reformed Moetrice helps Jessica, by reviving a phantom version of Kanon, who acts as Jessica’s eyes to lead her to "safety" (or another closed room actually), and then gives them time to speak together. However, EvaBeatrice strikes immediately, having the Siestas shoot Moetrice through the heart. 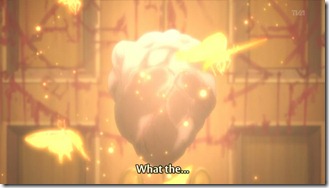 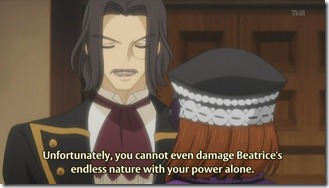 Repeated shots and Siesta bazookas turn Moetrice into a husk of a heart, but fail to kill her. This freaks out the Siestas, who most likely didn’t get the irony in them calling Moetrice a "monster" and then running away. Ronove appears to tell EvaBeatrice that she lacks the power to kill Moetrice… even if she is nothing but a beating heart now. 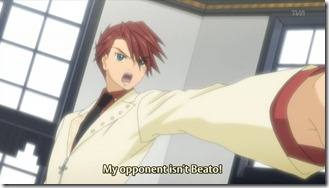 Before EvaBeatrice tries to step on Moetrice’s heart though, Battler cuts in and gives Moeto a backhanded compliment before bringing EvaBeatrice into the metaworld to do battle. 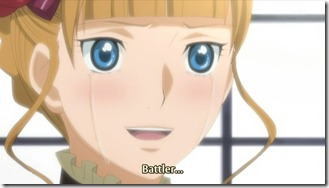 EvaBeatrice, who seems startled by the change of scenery, takes the thug route and tries to off Battler. However, his endless nine power (Haruhi to thank?) easily wards off the Siestas attack and he scares them away. Battler then sticks up for Moetrice and vows to show EvaBeatrice the true meaning of being a Golden Witch. In turn, Moetrice graces us with a knee jellifyingly moe blush and tears. And thus begins the more mental battle between Battler and EvaBeatrice.

I wonder if it’s even worth recounting the events, because the story gets so messed up (in a good way), but I’ll recount it briefly. Essentially, Battler tries to use Maria and Rosa’s deaths in the second twilight to trap EvaBeatrice, telling her to repeat in red: Aunt Eva never took a step out of the room while the crime was going on. EvaBeatrice doesn’t. In fact, she doesn’t even counter this, and instead conjures up the events in the 4th to 6th twilight. Battler was sloppy here, letting her slide. I don’t know if the VN goes into it more, but he let her skate free on the 2nd twilight. But him and Moetrice are able to corner EvaBeatrice again in her scenario. She claims that the reason why Kyrie suggested that she, Rudolf and Hideyoshi leave to get food, when before she said it was safer in the guesthouse was because EvaBeatrice controlled her with magic. While Battler’s getting flustered (still much too easily, he should be getting better at this), Moetrice asks Virgilia to reconstruct the death scenes of Hideyoshi, Kyrie and Rudolf. Although, she’s unable to figure out a solution, she finds a smoked cigarette amongst Kyrie’s belongings. Battler recognizes this as a message from Kyrie, and that the reason she brought Hideyoshi out there was to ask him about the truth. He tells EvaBeatrice to repeat in red that Eva was in the room where the cigarette butt was crushed. EvaBeatrice refuses again. And again Battler lets her slide as she takes the offensive again. This is getting embarrassing for Battler. 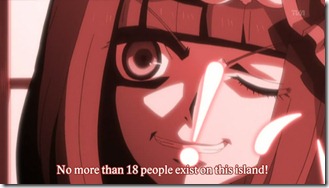 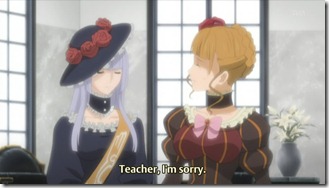 EvaBeatrice goes on the offensive by firing some rapid-fire red text about how Battler was with Eva the whole time Nanjo got killed. And how none of the three survivors killed Nanjo, although he was indeed killed. At this point Battler becomes unhinged and accuses EvaBeatrice of lying with the red text. Failing to come up with a good answer, Battler collapses into a despondent heap. I like Battler. But I want to like him a lot. I want to give him a chance to make my top 10 list of characters. But every time he gets a chance, he fails. Why didn’t he continue to press EvaBeatrice on the prior twilights? Solve the 2nd and 4th-6th twilights, before thinking about Nanjo’s death. Maybe answers will arise from figuring them out. And if your first guess to the Nanjo murder is wrong, step back and think about it. But Battler is so easy to fall into mess of despair, that it’s a wonder that he hasn’t been blown off the game board already. Thankfully, Moetrice is going to come to Battler’s rescue.

By sacrificing herself. She vows to use the red text to deny that witches exist, eliminating everyone but Battler on the game board. Battler asks Moeto not to sacrifice herself, but eventually relents. In return, she asks Battler to cover his ears.

The sacrifice occurs. Eva reveals herself as the killer, kills Battler, and then… Battler and Moetrice find themselves invited to come to the Golden Land (Battler and Moetrice sure look like a nice couple in that screenshot). But wait. Hmm… this seems like a strange thing to be happening if witches don’t exist. 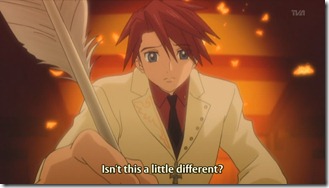 I thought you said no prenuptials? Wa-wait a second. This contract seems a little off. This is totally different from what we talked about.

Wait. W-w-what the heck is up with these strong-arm tactics?!?! Yo, don’t touch me demon goat! 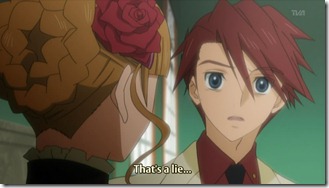 A trick? No. No way. You lie! Moetrice, she’s lying isn’t she? You wouldn’t do that, would you? Right? RIGHT?

…no… not the tsundere trojan horse… no… how could you? I thought we had something special… no…

Battler and I both fell for her. But sadly, it seems she is no more. All hail the return of the Golden Witch, the Endless Witch, the one and only, Beatrice.

What a great scene. What a freaking great scene. I was stunned. This was the first time during this show where I felt a twist and turn was perfectly setup, and where I felt there was a more grandiose plan in mind versus nitpicking about the feasibility of a closed room. 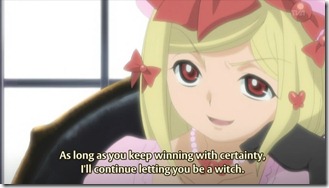 I suppose the chances of Beatrice having a soft spot is probably zero, but I continue to hold on hope. Maybe that’s why I noticed her hesitate in answering Lambdadelta’s question about whether she was even trying. Sometimes, you become deredere, no matter how hard you try not too. Regardless, Beatrice is back. And Moetrice is gone. Interestingly, Lambda seems to hold some sort of power over Beatrice. I had thought they were on equal ground, but perhaps not? 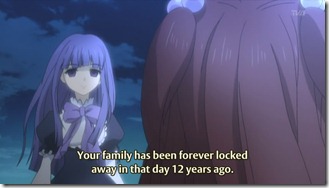 Twelve years later. Battler’s sister Ange has grown up. And Eva still holds onto her hate, even as her shockingly quick decline into sickness and hate lead to her death. With the last connection to her family gone, Ange seems ready to throw her life away. That is until she meets Bernkastel, who informs her that she has a chance to break her family out of the cycle of death she’s been stuck in. The few quick minutes that Ange had screen time gives me a lot of hope that she’ll be able to provide the necessary cool focus necessary to help Battler solve the mystery. Meanwhile, I’m glomming completely to Bernkastel. Maybe because it was because I was hurt by Moetrice. Maybe it’s a rebound thing. But I think it’s more than that. I know I can trust Bernkastel. We have history. We have Yukari Tamura. I knew Bern was working somewhere behind the shadows. She will deliver.