When I decided to start blogging I had no idea that the hardest part would be coming up with engaging and witty opening paragraphs every week. Nor did I know how fun it is to take screencaps, or that there’s this setting on my player that plays the actual episode on your desktop. Guess I’m still really new to all this. On another unrelated note, Chartfag’s chart is out and man am I looking forward to this season. It all looks good, except maybe that one about the 100 casual sex partners…
OK, now for the post.

Summary: The school goes orienteering and Yoshii and co. win some key rings and bracelets.

Episode 5 is as of now the best episode so far. It’s got a pretty simple concept; come up with a situation of sorts and show all the different character’s reaction to it. What was brilliant about Baka to Test’s episode was that even though we’re only 5 episodes into this show, many of the characters already have defining personality quirks and they will inevitably end up in a situation to showcase these. Voyeur will end up in the girls locker room. Glasses guy will end up somewhere Yoshii related. Hideyoshi will end up unexplainably (even more so than normal) cross-dressing. 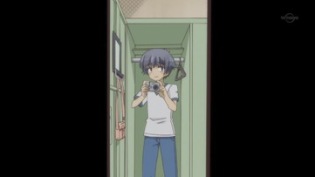 Minor characters in comedy shows often are a character with one quirk that is always exploited when they’re onscreen to the extent that you can guess what will eventually happen after a while, like whenever Yutaka Takenouchi appeared in Cromartie High School you knew there would be some travelling going on, or when Ryouga appears around the start of Ranma 1/2 he will get hopelessly lost at some point. I’m not saying I don’t like this or anything. Episodes that have every character coming in and doing their one thing are comedy gold to me, especially if that character hasn’t appeared in a while. Nothing’s more gratifying then seeing your favorite character return with all the things you loved him for, and maybe this will happen in Baka to Test in the future. It seems like the type of show, and it definitely has enough characters. 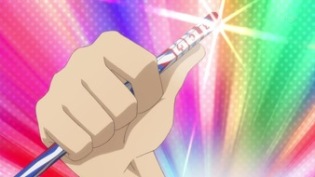 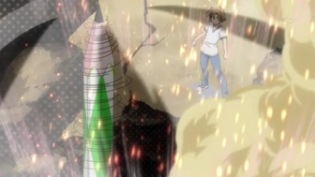 The above I’d guess was a parody of special weapons in general, though it reminded me of Bleach. Either way, among its tough competition, any scene involving pencils wins as the best scene this episode (though the blink and you’ll miss it Gundam SEED reference comes a close second). It also shows why Yoshii did so badly in his tests but it’s already damn well obvious by now he’s deserving of the title baka.
An interesting thing to note is that Yoshii and Yuuji know that they’re idiots but in the orienteering they work out a plan that actually takes their idiocy into account. None of the characters are through and through idiots; Shimada is good at maths, Voyeur’s got his health, Yuuji’s got a degree of street smarts, and even Yoshii sometimes shows some smarts (not that often). Hideyoshi hasn’t shown his hidden smarts yet but he hasn’t shown any serious stupidity either. To be honest he doesn’t really do much except cross dressing. 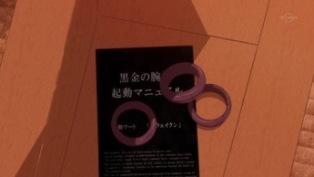 Overall, I like where Baka to Test is heading. The bracelets present an opportunity for Yoshii to actually gain a main character power other than chick person magnet attributes and that principal definitely has something up her sleeve.I just hope it can keep up with this level of class.

As always, no spoileriffic comments, and apologies for being late but in my defense it would have been sooner if I hadn’t found Wolf’s Rain DVD’s in the library.

2 Replies to “Baka to Test to Shokanjuu episode 5”