I’m late posting this because a.) I was saving the world in Mass Effect 2 (much better than ME1) and b.) I’ve been thinking for the last couple days about what exactly to say. To put it succinctly, it was a great episode. 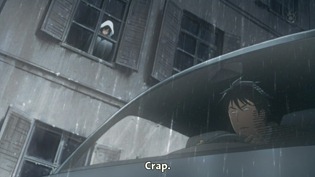 For anyone that’s been clamoring for more Nodame x Chiaki in this season (uh, is that basically everyone?) this is the episode that delivers the goods. Funny Noda moments. Funny Chiaki moments. Heartwarming Noda moments. Heartwarming Chiaki moments. And funny and heartwarming moments between Noda and Chiaki. Plus, even though we didn’t get any grand performances, once again I enjoyed hearing Chiaki explain the story behind the songs, as he leads Noda through practice boot camp. But the dorama begins when Nodame by happenstance learns from Yun Long that Chiaki will be performing the Ravel piece that she so adored with Rui. Tomokazu Seki’s "yabai!" when Chiaki realizes Nodame’s discovered the truth had that perfect hint of "oh crap, danger!" to it.

Again, kudos to the seiyuu, in this case Ayako Kawasumi, because I think her delivery had that perfect mix of heartbrokenness and defiance, as Nodame finally unleashes her frustrations with being treated as a bebe-chan by everyone from Chiaki to Yoda-sensei. It’s totally understandable. Because everyone seems to treat Nodame with kid gloves on. On a separate note the way that word "bebe-chan" sounds really cracks me up. When I go to Japan I’m going to go around calling people bebe-chan just to see what happens.

lol, Chiaki is really an old man. I wish I could get by on 4 hours of sleep every night. I did that by accident a few weeks ago, and it took me a week to regain any semblance of nighttime normality. Ugh, maybe I’m getting too old. Anyway, I thought it was interesting that Chiaki tells Nodame that maybe Yoda-sensei isn’t letting her enter competitions, not because she hates her, but because she lacks the skills. It’s interesting because "lack of skill" was something that I never associated with Nodame. Lack of devotion, lack of discipline – yes. But lack of skill? That hadn’t even crossed my mind.

Nodamustang! I don’t know why I found that so funny. But after seeing all the times where Chiaki disappointed Nodame, it was really nice to see him make a sacrifice to be with her and to challenge her skills. It wasn’t played up too much, but going as far as cancelling his Italy trip, and studying with Viera-sensei… that’s such a big deal.

What the… fish? Nodame Cantabile continues it’s great tradition of visual gags, as I loved seeing the very, very sudden process in which Nodame goes from consumed with playing to stinky and totally gassed. I imagine this is how a Sim would look like when they’re energy and hygene bars suddenly go from green to red.

It was really cool seeing Yoda-sensei watching Nodame’s playing with such an intense look on his face. I wonder if this was the first time that he really felt that Nodame was living up to her potential. Seeing how he has an intense practice schedule for Nodame planned, it feels as if he’s trying to cram a lifetime of learning into the 3 years he has with her. Nodame’s like a high draft pick, who toiled away years in the low minors, before she realized that she’s only got a year left to make it to the majors, lest she be considered a bust forever (I blame Shinmaru for starting the sports analogies).

Ah, another kiss! I liked it. Really low-key, no drama. It makes sense. How long have they been "together?" No need for the typical anime shebang! Just a cute moment between the two. Besides, I bet they’ve gone much farther already anyway 👿 .

While most of the episode was focused on Chiaki helping Nodame, there was a little movement on the Kuroki x Tanya front, as Tanya apologizes, and Kuroki asks her to play as his accompaniment. Honestly, I like Tanya chasing Kuroki, but I don’t really like him reciprocating her advances so openly. It’s just more funnier when she’s stealing kisses and he’s getting blue in the face.

One more thing I wanted to comment on, when Kuroki and Chiaki were talking about Nodame, it’s interesting that when Kuroki suggests that the two play with the Rising Star orchestra, Chiaki dismisses the suggestion, because he doesn’t want her to be satisfied and let things come to an end. It makes me wonder if he thinks Nodame still just wants to be a kindergarten teacher. A Rising Star orchestra finale would be a fantastic way to the end the series, IMO. But his comment made me curious about what he’s thinking.