Man, I should’ve saved my "Bebe-chan grows up" subtitle for this week. Another good Nodame x Chiaki-centric episode. 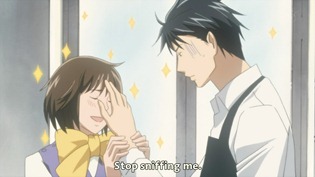 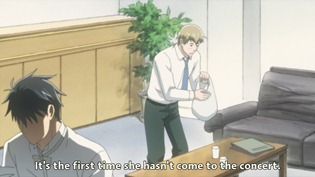 Nodame and Chiaki have always had this weird give and take. Actually, it’s more Nodame’s weirdness. For someone who can be so obsessed with Chiaki, she also becomes remarkably cool to him when she gets deeply involved in one thing or another. If she had a better attention span, I think she’d be prime for megalomaniac training. 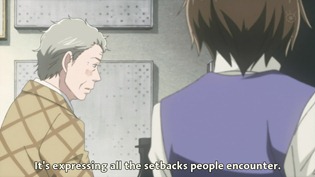 But days of forgetting about Chiaki, and missing his shows pays off as Bebe-chan’s new dedication to her studies gives Yoda sensei reason to graduate Nodame from a bebe (lol) to a Megumi. Aww, I’ll miss my bebe-chan though. There’s something about listening to Ayako Kawasumi screaming "bebe-chan!" that really soothes my soul. 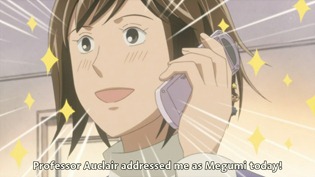 But lest bebe-chan get too full of herself, Yoda sensei leaves her to continue practicing her Beethoven piece, to try to perfect the betrayal, despair and hopelessness the end of the piece is supposed to convey. Bebe-chan, though is a little too buzzed about her recent graduation, that is until she learns that Chiaki and Rui will be spending some alone time together to practice for the upcoming concert. I am Bebe-chan’s complete lack of surprise. I am Bebe-chan’s inflamed sense of rejection. I am Bebe-chan’s broken heart.

Actually, I don’t think Bebe-chan was that broken up by the news. The Rui x Chiaki drama was forced, but I think it was on purpose. Like Yun Long suggests, I think she was having a little fun with it and being melodramatic to draw her inspiration to perfect the end of the Beethoven piece.

Chiaki really should be used to how slobby classically trained girl musicians are. Rui’s slobness reaches Nodame’s level. It only looks better, because she has a larger place I think. And what in the world is California juice? Some sort of watered down wine?

I thought the scene in which Chiaki and the Roux-Marlet concertmaster was really interesting. Chiaki hints at wanting to hold back during Rui’s performance, without stating that it’s probably for Nodame’s sake, but is rebuked by the conmas, who delivers a really excellent line actually. Basically, don’t be defensive, since Chiaki has nothing to defend. It’s an interesting way to deliver the typical "give your best every time!" line. It also forces Chiaki to check himself, because he realizes that holding back for Nodame’s sake doesn’t make sense, since she’s shown that she never fails to blow his expectations away. It’s moments like these where I think "damn, that Nodame must really be something special." 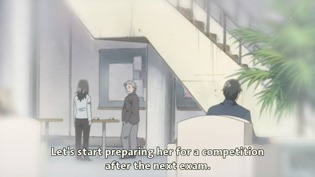 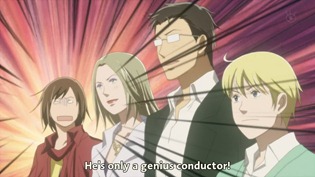 The big news for Nodame, beyond her graduation from bebe-chan, is that Yoda sensei has plans for her in the works (unbeknownst to her). Competition plans. I wonder when we’ll see that come to fruition. It’s a big deal for Nodame, but not big enough for the series end. Next episode we’ll see Chiaki and Rui shine. I’d expect Nodame to get to compete in the next episode after that. Maybe even stretching two episodes. That would leave us with one final episode for them to go out with a bang. There’s supposedly a Nodame OAD planned to be released in April, but I’m sure that’s not going to be connected to the main story. Argh, time’s running out. I’m getting antsy. We shall see.