This was an awesome episode. The backgrounds looked beautiful, the animation was solid. I actually even enjoyed the music quite a bit. Yep, an excellent episode indeed.

It sure doesn’t take much to fell Nemuru’s "dad" (I still think he’s her granddad. Either that, or he was robbing the cradle with her mom). Now a question for you, why exactly is this dam worker running out to incite the crowd for? Did he think they’d help him? Or was he just blindly following a foolish dead man’s direction? If you knew some dude was heading to the dam, shouldn’t you maybe go… to… the… dam? Perhaps to try to stop him? 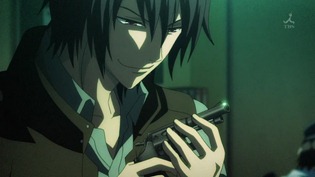 Now another question for you. Look at pharma dude in picture 1. He is holding a gun. Then look at him at picture 2. He is holding a knife. Now, why would he even bother attacking someone with a knife when he has a gun? Because he has only 6 bullets? Ok, fair enough. But why bother to use the knife if his stealth XP is so low. Solid Snake, he is not. Needless to say, pharma dude’s "ambush" fails and he resorts to using a gunshot to kill the one, lone dam worker (you mean to tell me that humongous modern looking dam is operated by one man!? Ok, whatever), but not before pharma dude himself is injured as well.

At least pharma dude succeeded in opening the dam. But where exactly does he go afterwards? He goes to the forest. I don’t know why. If he really wanted to wipe out the town, shouldn’t he have been defending the dam controls with his last breath? Instead, he pulls the contagious mistake of leaving the wounded behind without finishing the job. Needless to say, Nemuru’s black wolves arrive in time to minimize the damage (although it’s pretty catastrophic for the New Town). 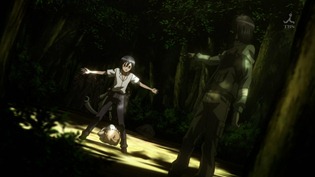 That is one dark forest. Seems like the only light is filtering through the trees (I’m going somewhere with this, hang onto this thought). Pharma dude heads to the forest to live out the Unabomber life when Isuzu arrives to stop him from turning to the hermit life I guess and is shot in the leg. Bullet 2 gone. Nemuru and wolves arrive at the scene. Wolf-lackey #1 attacks pharma dude, but is shot down. Bullet #3. Pharma dude vows revenge on Nemuru, but Hiro arrives spouting some brave words.

So then Pharma dude grabs Hiro and points a gun at him… and in the process of doing so turns his back on Nemuru and the wolves. You know, those wolves with super strength and speed. He turns his back to them. Instead of turning Hiro around and remaining faced towards Nemuru and goons, he turns his back to them. I can’t emphasize the stupidity enough. Of course, nothing bad comes out of it. But remember how this is a really dark forest? Well, the next thing you know, Pharma dude has pulled Hiro out to a bright and sunny cliff! Where did that cliff materialize from!? Is it related to Pharma dude’s previously established talent of materializing large knives in his hands? And why is that as soon as the cliff is introduced, light starts flowing into the forest?

Now that everyone is bathed in the warm sunlight, things can happen again. Pharma dude takes a shot at Nemuru, but Hiro – in his greatest and only display of courage, is able to push pharma dude’s hand out of the way, sending the bullet astray. Bullet #4.

And then- WHAT? Floating white wolves? Kaori’s band of wolf angels arrive on the scene. This is the first time I wondered what the difference between these white wolves and Nemuru’s block cloaked wolves was. Sadly, it’ll also be the last time, since we got no answers. 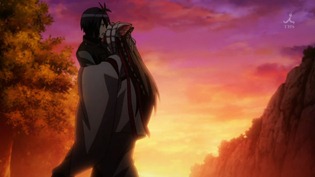 Nope, we know nothing more of Kaori’s condition, nor her new role as white wolf queen. And after such murderous rampaging Pharma dude was subject to one of the most humiliating deaths I can remember. Hugged and walked off a cliff. I- uh- really have nothing more to add to that. It is as embarrassing as it sounds. Hugged and walked off a cliff. It was quite frankly, an amazing scene. Minimal struggling on his part. Pharma dude seemed strangely satisfied, even though he accomplished very little actual revenge. 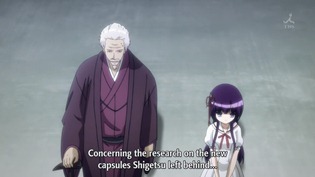 And then after that things were more or less back to normal. Oh, much of the New Town was destroyed. And just about everyone moved out after learning that everyone in the Old Town wanted to get sexy time with them. Nemuru’s uncle’s research apparently lives on. But for Hiro and the gang it was back to the slice of life salad days, albeit with a little less Isuzu glomping and a little more Nemu-chan moe to fill the gap. The moral of the story is, you have to understand people who may be different from you. Even if they’re trying to turn you into a sex zombie. Especially if they’re trying to turn you in to a sex zombie.

Next week’s episode appears to be unconnected to the main story, so this is it.

Strangely, even though most of the season felt like it was paced ok, maybe even a little slow, the ending felt rushed and incomplete. But maybe that’s just because the story itself turned out to be really fluffy and had very little depth to it. Weak characters. Weak story. Nonsensical decisions. As gg stated, Ryukishi07, I am disappoint.