I have survived. Don’t let anyone tell you Hinamizawa isn’t scary my man, because it is. Oh sure, during the day all the tourists file in and everyone’s having a jolly good time. But once nightfall comes, this is the real Hinamizawa. I stayed the night and looked down the eye of Oyashiro-sama, and what I saw scared me senseless. There is no end to the blackness.

I was hoping to get some awesome nighttime shots of HInamizawa, but unfortunately due to the weather (and not my cowardice), I was unable to. So you’ll have to suffice with the couple pictures I did take of the houses within a 10 foot radius of where I was willing to venture. 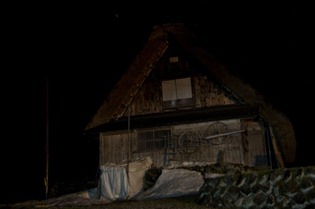 Hinamizawa at night is dark. Sure there’s a few street lights here and there, but it’s pitch black. Even moreso when it’s raining and there’s no moon shining down (oddly enough I saw some stars, so it wasn’t complete cloud cover). When I took these pics, all I saw through the viewfinder was darkness. So I just had to aim in the general direction, pump up the ISO, and use a 5-8 second shutter exposure and hope for the best. I’d intended to go to the lookout at night, but then I thought better of it. I wasn’t about to travel through complete darkness to get there. While raining. You really need to plan around a full moon and hope for no clouds to have that opportunity. Furthermore, I also wasn’t about to risk getting demoned away. As if Hinamizawa wasn’t scary enough, those mountain roads have no guard rails. And cars travel on them too. Walking up there was scary enough during the day. 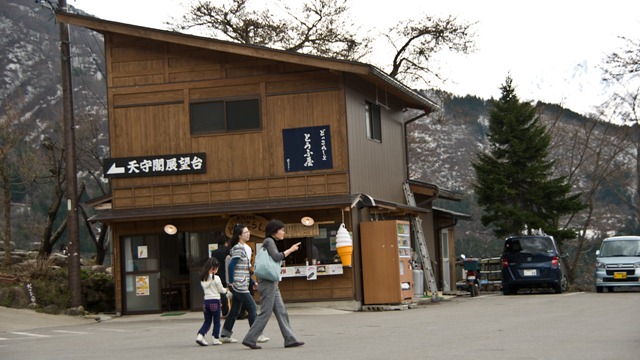 Once I got up there, I was a little surprised to find an ice cream store (another one!). Maybe I shouldn’t have been. Apparently it’s a big tour bus stop now. Akasaka might not have decided to help Rika if he was distracted by the ice cream. Or maybe Satoko wouldn’t have pushed her parents off the cliff if she’d been placated by the sugar. Oh how times have changed since Showa 57.

The lookout itself is about as sugoi as you might imagined. For some reason, blue skies just blowout in my camera. I must be f-ing up some setting. Hmm, what else?

Oh look, it’s Satoko’s house! At least, I think it’s Satoko’s house. It was the closest house to the lookout road, and it was sort of isolated on its own. Satoko doesn’t live there any more. I think it’s just a storage shed now. Otherwise, whoever moved in is a complete slob. I wonder if that thing next to the house is a roadside shrine to honor her?

The suspension bridge was not as high as I remembered it. The water levels apparently get much higher during the summer, after the rains and some of the dams let out, but right now, if someone were to fall from the bridge, they wouldn’t fall to their watery death so much as get smashed on the rocks. I will say, this was the first concrete suspension bridge that I’ve ever walked on, in which I could feel it sway. It was sort of freaky.

It’s good old Irie Clinic! I looked in, it was pretty empty. Seemed free of shenanigans too. To be honest, I don’t know how it stays in business. I can’t imagine there’s many injured and sick people visiting often. 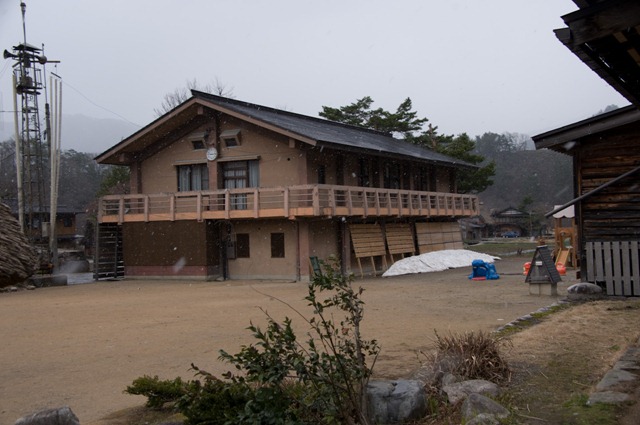 I think this was the school building. The playground wasn’t laid out the same way as it was in Higurashi, so I’m not sure. Now it’s used for blasting announcements throughout the town.

I was very disappointed when I found this shrine and thought it was the Furude Shrine. It was much too small. Plus, how could anyone hide a body there? Well, just to be safe, I made a donation and a quick prayer to Rika-chama. But thankfully, I was wrong, and I found the real Furude shrine. (Although the house next to this shrine quite possibly could’ve been Rika’s house, because it was the largest house in the town). 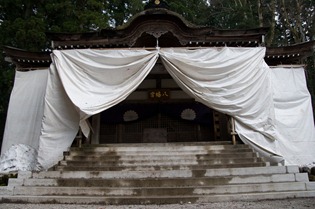 Now this looks more like it! Of course, I made a new offering and prayer to Rika-chama at her real shrine.

I took about a hundred pictures of this place, and none of them seem to do it any justice (plus, I do a crappy job of taking pics apparently). There’s a museum next to the Rika Shrine, I went there and got to taste what’s called Doburoku sake. Apparently, it’s special sake that’s created by the temples and drunken only during the Doburoku (Wataganashi) festival. No sale or export of it allowed at all. At that point, I felt a real sense of accomplishment. As if the trip was indeed worth the while, just for this moment, to be able to drink with the spirit of Rika-chama. It was dekkai sugoi.

In the real Hinamizawa, you’ll find no reference to anything Higurashi related. Not even little doodads in the stores carry anything Higurashi-branded. I assume they’ve heard of the show, but I guess they don’t want to overrun the place with crazy otakus. Fair enough. It is still a very small farming town. I doubt many of them even have Internet access. The one exception is the offerings to Rika, where you’ll find all sorts of characters, from of course, Rika-chama, to Keichii, Satoko, Rena, Shion/Mion, heck even Rena’s billhook (not sure if that one’s a threat). There’s also Sakutaro, a couple of him actually, one of Nagi, one of Kagamin, even some Moyashimon germs for some strange reason. I’d love to know if anyone has any idea what some of these say. 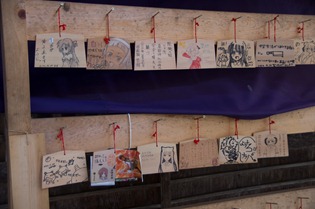 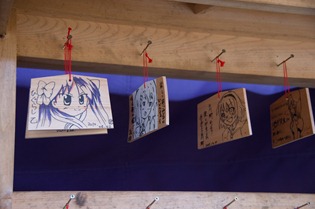 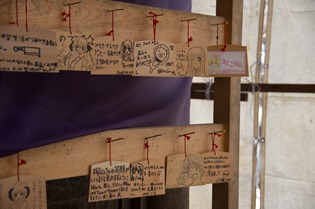 Places I could not find: the phone booth where Keichii made his final call, the police station, the Sonozaki mansion. There’s no way the Sonozaki mansion could’ve existed in this village. Maybe something like it exists in the next town over. All in all, very cool experience. I’m also glad to have made it out alive (or did I die, and am I living some alternate reality right now?).

14 Replies to “Rika-chama hold me”