Well, not really, but let’s say a character she was voicing was. Would you consider that a world with no God? I would think not.

Oh God, Azu-nyan, you have been replaced. So we get to episode 4 and a new OP? Well again, not really, but some new screens to show former roadie-turned-lead-singer, pink haired genki girl, Yui trying out to take Iwasawa’s place as lead singer of GirlDeMo. Still pretty cool. I’m gonna guess there’s a lot of Yui haters (or people who think she’s annoying) out there, but she seems like the type of character that was created to pander to people like me who have a thing for cute, genki pink haired girls. So yeah, I love her more than Yuri now. I look forward to seeing her sob story as well. 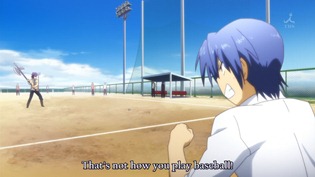 I’m not sure what the general buzz around this episode was, but I enjoyed it. Definitely a bit filler-ish, but there were a lot of funny parts. But more importantly, even though the ep doesn’t really move the story along, I thought it was pretty important because it raised some questions for me about the world their living in.

We learn a little bit about Hinata’s real life – although it’s so scattered and devoid of real detail – that we don’t know much except that he was probably pretty good at baseball, and maybe had a drug issue. But more importantly, after everyone’s pretty emotionless reaction to Iwasawa’s disappearance in the last episode, I liked seeing Otonashi trying to prevent it from happening again- 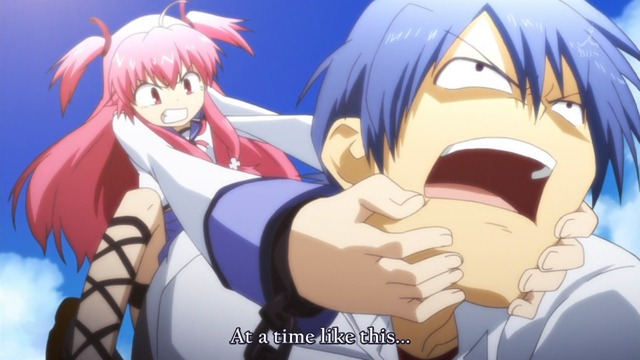 Until Yui got in the way and gender role reversed the head between legs thing the two of them have got going on.

But it made me think, also in large part due to joojoobees’ comment, what do we really know about the world their in, and the importance of disappearing? We know what Yuri told us – that they disappear and become reincarnated as water fleas or whatever – but how does she know that? What if she’s wrong? The first thought that popped into my mind was the disappearance sequence in Haibane Renmei, the Haibane are led to believe that it’s a wonderful thing, but that’s what they’re told, they never really know for sure. Same thing here, except we’re told that disappearing is not a good thing. But by the look of relief and acceptance on Iwasawa’s face and that same look on Hinata’s face, I started thinking that maybe that’s not the case. Maybe disappearing is a good thing. Perhaps they’re actually in some sort of purgatory state, trying to correct a wrong or remove a regret before they can move on.

Read Josh’s post for further thoughts on the comparison between Haibane Renmei and Angel Beats.

5 Replies to “Angel Beats, episode 4 – So Eri Kitamura’s head is in between your legs…”