If you’ve recently gone out to a chain restaurant or bar  in the US, you might’ve noticed that the menus now include nutritional information. Most of the time, it’s really shocking as to how ridiculously unhealthy the food is. Outrageous numbers of calories and astronomical quantities of sodium. And it makes you reconsider your decision. Maybe I won’t have that 5,000 calorie bacon chili hamburger monstrosity. Maybe I’ll get a salad instead. So you get the salad, and la la la, everyone has fun. But then at the end of the night you think. Well, my choice of food didn’t change how much fun I had with everyone. But then why do I feel so unfulfilled? Why do I feel the night was not as fun as it should’ve been? And then you realize it was all because of the salad. You feel empty because there was no meat. And at that point, you realize you should’ve just bitten the bullet and ordered the heart attack on a platter. At least you would’ve been fulfilled. That is the salad trap. And I mention it because Occult Academy is one big fucking salad trap. A-1 is really pissing it away. 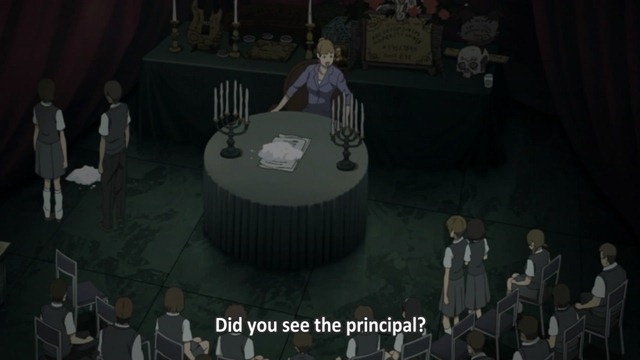 We are now in episode 9 of a 13 episode season. Amazingly, episode 10 will be the second parter to this monster of the biweekly routine. There is absolutely no progress in the main story. Nor is there anything to suggest much character development in this episode.  Meanwhile, the story itself is not that interesting. And although we get a couple cool Maya faces, they’re close to ones we’ve seen before.

So basically, during a summoning class, the Vice President accidentally summons a lost loli, instead of Maya’s dead father. The loli latches onto Smile and Maya, and the gang decide to help her soul find peace.

Bunmei is mostly out of the picture, because he doesn’t adhere to the Maya and bros before hos rule. And continues to serve as Mikaze’s food puppet and her schoolground pimp, this time getting approval for her to serve ice cream to the kids.

The gang finally find the loli’s home, but things go strange when instead of being happy, she cuddles up in a corner, creates a miniature blizzard then disappears. In talking with the landlord, who’s apparently used to small summertime blizzards tells the gang that the little girl froze to death on Christmas Eve waiting for her dad to come home.

The gang track down the loli’s dad and tries to get him to help them save her. But he rudely dismisses them, because of his guilt. Of course, we know he’ll eventually help them in the next episode, the loli will eventually find peace, and the dad will be relieved. And there will probably be some flashbacks to Maya and her relationship with her dad and her finding a bit of peace through the loli. Book it. Yep, I said it. Book it. If the next episode doesn’t unfold in this way, I’ll randomly pick a commenter to write the post for the next episode.

Meanwhile, I’m looking forward to episode 11. Mostly because that’s the soonest episode in which actual important things might occur.