Highschool of the Dead is best when it just rides the gore and oppai wave and not mess with getting too dramatic. Unfortunately, we were light on the oppai and almost totally missing on the zombie gore. 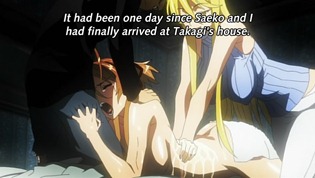 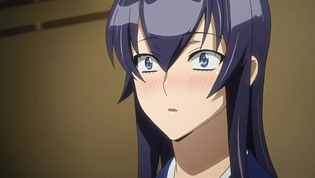 So what was cuter this week? Rei whining about how her breasts hurt because of Takashi’s sharpshooting manhandling or Saeko blushing in a yukata? This might ostracize me like Kouta in a knife fight, but I’m going with Rei this week. Marina Inoue’s squeaky voice during the scene in which Rei tells Takashi her oppai hurt was just too cute. Plus, we’ve had enough of Saeko moe lately. I want to stir things up. 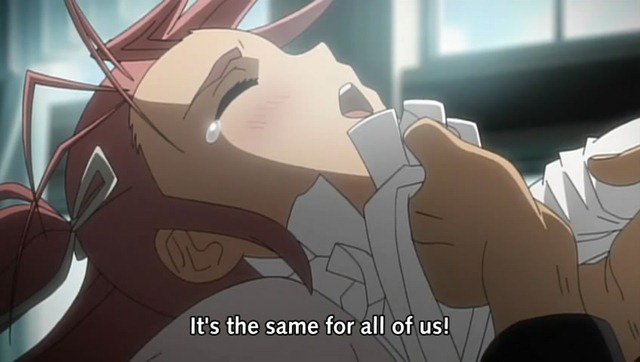 For an episode heavy on forced drama, one angle that was left all alone was any semblance of a love triangle between Rei, Takashi and Saeko. Perhaps they’re planning to save that for season 2. But otherwise, the first half of the episode focused on Saya’s dorama (say my name bitch!) and her anger with her parents for not coming to save her immediately. To be honest, I think there was a little bit of credence to Saya’s beef, and I think her anger was a bit justified. How would you feel if your parents saved everyone in their circle besides you? I know technically Saya’s mom saved her, but that was more happenstance. But there’s a time and a place for the complaints, and like Takashi browbeats into her, at least she knows her parents are safe. The Takashi x Saya fight scene was a bit over the top. For a second, I thought Takashi lifted Saya by her breasts, but he decided to go with the more conventional shirt lift this time. Either way, it was a bit heavy handed, and I thought a simple slap or a shake of her shoulders could’ve gotten the point across. 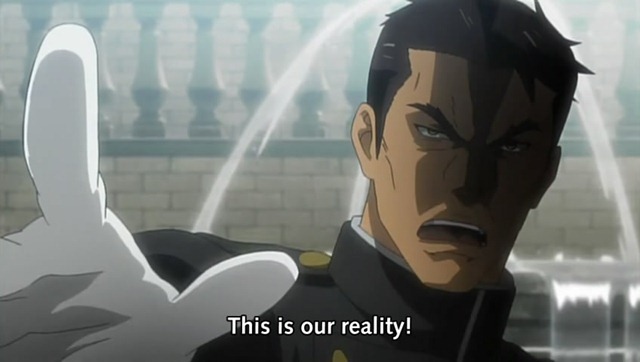 We also meet Saya’s father. Who’s sort of like a serious version of every mob boss dad you’ve ever seen in romantic comedies. Except like I mentioned, this dude is SRSFKNBIZ. He’s another over the top kind of character, and I couldn’t quite tell whether I liked him or not. He seems more reasonable than his thug-like lackeys, but I guess we’ll see in the next episode. 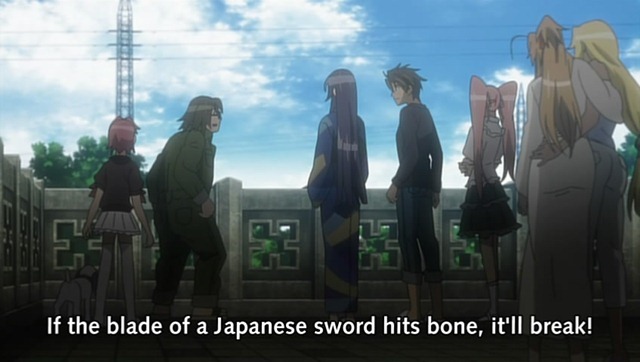 The second half of the episode focused on Kouta getting all itchy in the crotch for guns, in perhaps the most ridiculous, forced bit of dorama I’ve ever seen. It was so ridiculous that it came completely out of left field. Kouta, after seeing Saya’s dad slice the head off a zombie, goes on an unprovoked rant about how swords suck because they’re inefficient and break too easy. Perhaps he’s been too busy oggling Saya and Alice the loli over the past several episodes to notice Saeko taking down hundreds of zombies with a wooden sword. But after getting all huffy after Saeko defended the honor of the swords, Kouta splits and runs into more trouble. 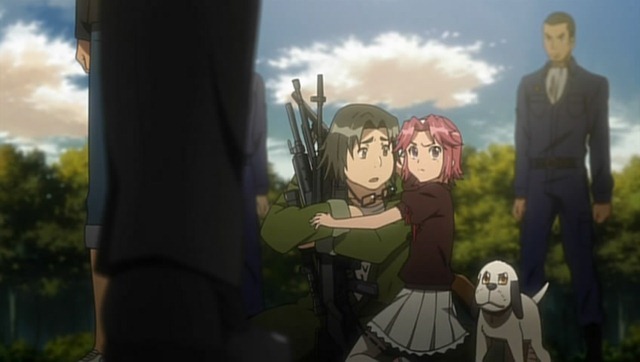 A group of Saya’s dad’s lackeys find Kouta making love to multiple guns at once and object to his polyamorous tendencies. What kind of man loves multiple guns? A man that won’t commit seriously to the one gun of his dreams, that’s who! Unhappy with Kouta’s objectification of his phallic weapons, they try to force him to give up the guns. But Kouta resists, holding onto the loves of his life, because they give him meaning. The same way multiple girls help Shidou sensei to go beyond normal teacher and become king of his very own bang bus, Kouta’s guns help him be something more than a loser otaku. Before things get messy, Saya’s dad arrives. And then Takashi and the gang step in to defend Kouta’s gun-loving honor.

All these events will eventually play into the group’s decision to stick with Saya’s parents group, and be little fish in a big pond, or go off on their own. From a completely practical standpoint, sticking with numbers and powers would be the no-brainer decision. But as we saw previously with Saeko, and this episode with Kouta, these extraordinary times give them personal meaning. And more than likely, they’ll be willing to trade their own safety and livelihood to continue holding onto it. It seems almost a foregone conclusion, but with only two episodes left, I wonder if we won’t see their decision until the end of this season. 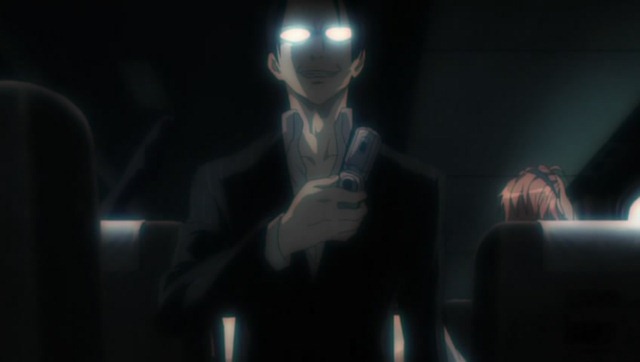 18 Replies to “Highschool of the Dead, episode 10: Say my name Bitch!”