Alright. So we might as well get this out there. There’s no tiptoeing around the bushes with this one. But you guys are all heartless bastards! Why? Because according to the results of last week’s HOTD poll, you guys have sentenced the innocent, lovable loli, Alice to her demise – sending her to join in Shidou’s bus of carnal delight. At the very least, let us please observe a moment of silence for a loli’s innocence.

Similar to last week, there was very little gore or fanservice. But unlike last week, this was actually a pretty good setup episode. According to donutsonfire’s comment in last week’s post, this episode was supposed to have covered a 108 pages of the manga. Or basically about 4 issues. And while there wasn’t actually that much development in this week’s episode, I guess I could see that, because there was quite a bit of jumping around. 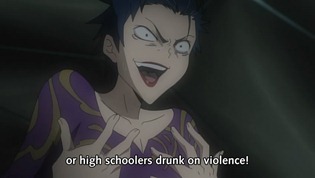 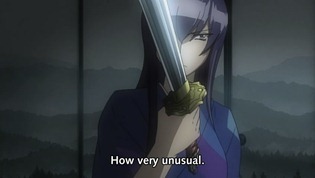 Where we left off last episode, the gang was defending Kouta’s right to bear arms. Presumably that went fine, because this week started off with Saya trying to talk some sense into the most bloodthirsty pacifists I’ve ever seen. And who was right behind her? That would be Kouta with his guns. Meanwhile, Saya’s dad finally meets the vaunted Busujima daughter and gifts her with some sort of special, historic katana. Meant to be graced by the heavenly touch of fair maidens, it was a little amusing seeing Saya’s dad hand the sword over the bloodthirsty, sex pistol. Both scenes fly by though, and neither seemed to hold much significance. My guess is that there was some backstory that was left out.

Meanwhile, Rei expresses her admiration for Takashi’s leadership skills and asks him to choose her. Things look like they might get spicy, but Rei’s chastity bra gets in the way. Seriously, what is that thing. Those straps have to chafe. 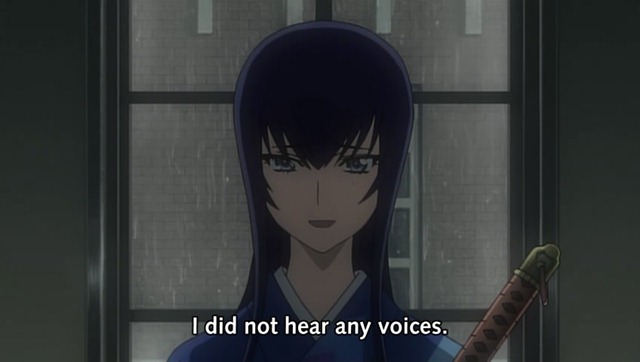 Rei leaves the room and finds herself in an awkward moment with Saeko waiting outside the door, looking ridiculously cute. Saeko, ever the lady, assures Rei that she did not hear any voices, moans or otherwise telltale squeals of delight. Although there’s a little bit of tension between the two, it seemed more around Rei’s being a lower grade. However, based on what she said to Takashi, and telling Saeko that Takashi would be happy to see her, I got the sense that Rei knew what happened between the two.

This is just another cute Saeko picture, when she asks Takashi to take her with him to find his and Rei’s parents. Cute overload aside, the scene was a little confusing, because based on the last episode, I was under the impression that everyone was going to stick together – whether under the protection of Saya’s parents or whether they go out on their own.

However, the kumbaya is cut short when Rei smells the scent of a predator and finds Shidou and threatens his life. We learn a little bit about Shidou’s background and the story her hate for him. I’d been under the impression that he had molested her or something. Since that is his M.O. Instead, Shidou, whose dad whom he’s not very fond of in the first place, ordered him to flunk Rei to get back at her pesky police officer dad. I realize Rei’s dad got some grief over her failing, and that it was completely unjustified, but her reaction seems pretty over the top. Sure Shidou’s a creep and I wouldn’t mind him dead. And for some reason, Saya’s dead supports it too. But her reaction seems unnecessarily petty.

Things should get interesting in the season finale next week (and next season – speaking of which, have they announced a 2nd season yet? It seems like a no-brainer), because apparently the US and Russia have started launching nukes at each other. On a slightly separate note, I lol’d at the random astronauts saying "Oh Kami". Is that an actual Japanese expression? How about "Oh my Kami"? All I know is it made me think of Ohmaigod!

11 Replies to “Highschool of the Dead, episode 11: Escalation”