This is AIC doing what AIC does best – creating animes with ridiculously cute girls.

So the first thing that came to mind – besides how ridiculously cute Kirino is – was that it’s a little weird hearing Yuuichi Nakamura voice Kyousuke. His voice is just seems too… GAR to play the loser brother. It’s probably the first example of how Oreimo is turning the typical stereotypes on their heads.

The second thing I noticed was- oh, I see what you did there AIC.

Oreimo is pretty much what I expected it to be, it’s cute, it’s occasionally funny, it’s mostly amusing and just one of those shows that’s nice to just turn your brain off and enjoy the ride. But the whole thing is a little weird, not necessarily Kirino’s obsession with imouto galge games, but the way she can’t seem to keep her hands off Kyousuke. No need to mount someone to wake them up. 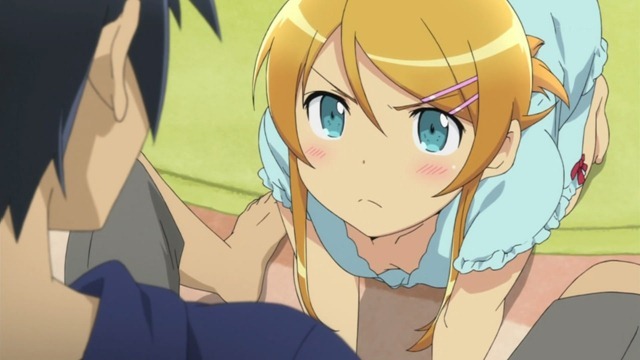 But the whole thing is sort of cute, because Kirino apparently enjoys the galges for the megas kawaii imoutos and not for the uh… enjoyment of the perverted arts. Although you really have to wonder how totally disconnected from reality she is, sharing her secret fantasy with her brother. Uh, little awkward? And I can’t see how this could possibly end well for Kyousuke. He really should’ve begged out and kicked Kirino out of his bed while he could.

One more serious aspect that I think the show pulled off well was the “outsider” view on otakus. The parents reaction to otakus based on what they heard on TV felt pretty realistic to me, at least based on what I know about the Japanese view of otakus. So the consequences of not keeping Kirino’s secret feels much more realistic to me than say in like Nogizaka Himitsu, which was just so over the top that I couldn’t take it seriously.

One Reply to “Oreimo (My Little Sister…) First Impressions”