The 12 Days of Anime project is CCY’s brainchild and the only way to celebrate the twelve chibis of Christmas!

As evidenced by the best show of the fall season: Shinruaky! Ika Musume 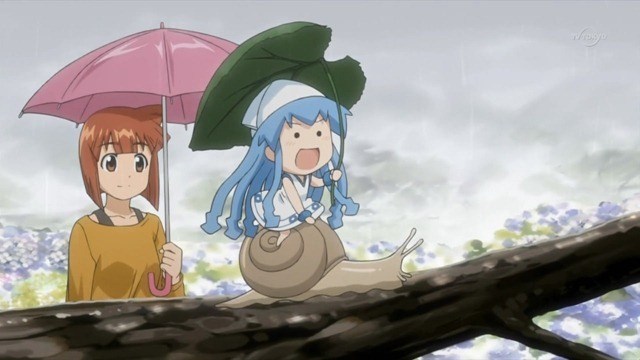 The fall season has been sort of a bust. I’ve thoroughly enjoyed Oreimo, but it’s tailed off a bit. Bakuman has been ploddingly average. Star Driver was a train wreck and a three episode drop. So even though Shinryaku Ika Musume has tailed off as well in recent weeks, I still think it’s the best show of the season. It also doesn’t hurt that it featured, what’s easily the best segment of the season, a 6 minute short with almost no dialogue, good direction, fantastic music, and more emotion than most shows conjure up in a whole season. But the segment wouldn’t have had the same impact without the ridiculous amounts of moe and cuteness. The dynamic and contrast between the moe and the drama is what makes the ending that much more powerful. This is the kind of short that wins Oscars. Unfortunately, I think Ika Musume has been so far under the radar even among the ani-fans.

3 Replies to “Moe is alive and kicking #Twelve Moments #6”