The 12 Days of Anime project is CCY’s brainchild and the only way to celebrate the twelve moe days of Christmas!

In this moment, I’m giving Brotherhood the shaft. 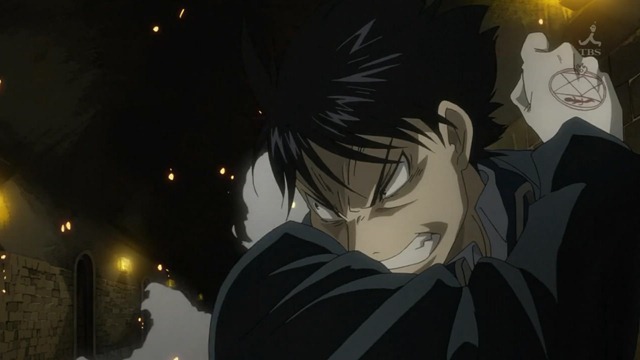 But it’s not because I want to. Honestly, the number of jaw-dropping, memorable moments in the show should rank it #1 or 2 in my list. But because there were so many fantastic moments, it’s hard for me to distinguish them in my head and they ended up splitting the votes. I mean, how about:

Just thinking about half these scenes chokes me up. The second half of Brotherhood was pretty much non-stop thrills. But of all those moments, I think Mustang’s evisceration of Envy was the most poignant moment.

It’s funny, I had Mustang’s massacre of Lust as one of my favorite moments in 2009. But this was different. Taking out Lust was cool, a spectacle. But this was more personal. This was revenge for the murder of one of my favorite characters in the show. Seeing Mustang cut loose, vengeful, wrathful to take revenge for his fallen friend, it was like he carried the banner of all the ones who loved Maes Huges. And seeing him go off on Envy – very easily the most obnoxious homunculus and quite possibly the most  patronizing one of them all was just the cherry on top. I wanted Mustang to lose it. I wanted him to not only destroy Envy, but to humiliate him along the way. To take all Envy’s condescension and turn it back on him by burning his eyes out and bathing him in flames. I wanted Riza to step back. I didn’t want Ed to interfere. If Envy was going to go out, he was going to go  outon his own. No cowardly way out. No rescue at the last minute. Of course, in the end Edward got his way. And the good guys took the good guy route. And I was a little bummed about that. Because it’s always more fun to see the anti-hero dance across the line between black and white. But still… there was resolution, a sense of relief, of deliverance. Like the good guy getting his comeuppance in an old spaghetti western. No one crosses Roy Mustang and comes out unscathed.