It’s been a while since I’ve written about a show I liked. I feel rejuvenated. Although ironically, I could totally use a good night’s sleep.

It seems like Yumekui Merry’s going to do some world building and character building, one standalone episode at a time. I’m sure they’ll start tying things together, but zombie girl Yumi from last week is nowhere to be seen this week. In fact, we don’t even visit the school. I’m totally cool with that. Enter one Minato, aka, Mini Ika Musume Mk II Jr., aka dojikko Rika-chama, aka little girl we’ll never see again. Mini musume is off doing her own thing since she has no real friends when she happens to see Merry perched atop a large cell phone tower or something, dreaming about donuts in the sky. 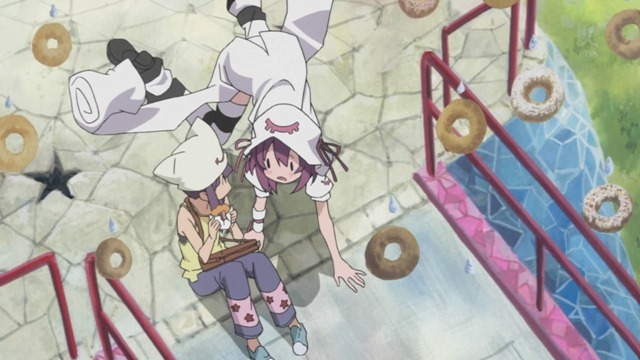 Since we know likes attract, loner mini-musume quickly becomes friendly with Merry, and unleashes donut rain to make sure Merry doesn’t slip away. Merry’s obsession with donuts is a.) cute b.) weird c.) both of the above. I suppose it’s not that different from Shana’s obsession with melonpan, but donuts are so… American! Also, where do girls in Japan get these neko hats. I want one. For myself.

While there’s no zombie Yumi, there is some continuity from last week as we see Chizuru slumming it. Unsurprisingly we learn that Chizuru has already become a vessel to one of the dream demons. Considering the squalor of the place she’s living in, unfortunately she may have shacked up with an Alpha Beta fratboy. 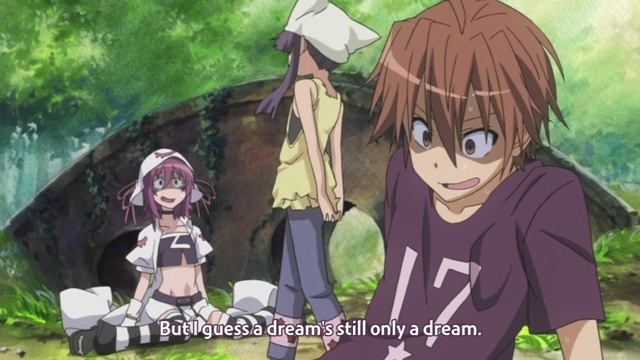 Meanwhile, Yumeji happens to run into Minato – or that is, he runs into a can she kicks – and also finds Merry along the way. Being the level headed male lead that he is, he joins the duo in playing kick the can, only for both to find that just because you’re THE BOSS in the dreamworld matrix doesn’t mean your not just an atrophied coppertop in the real world. Do Japanese kids also play kick the can? Or is this like an American dreamworld? Sadly, we don’t actually see any of them play kick the can. The one knock Yumekui Merry is that nothing is really animated. It’s sort of like a glorified picture drama. JC Staff must have cheaped out on the budget. Stupid Magical Index. I hope Touma’s long-winded speeches look absolutely stunning.

Before leaving, Yumeji offers to tell Minato her future only to see that she’s going to the demon dream world. And as luck would have it… 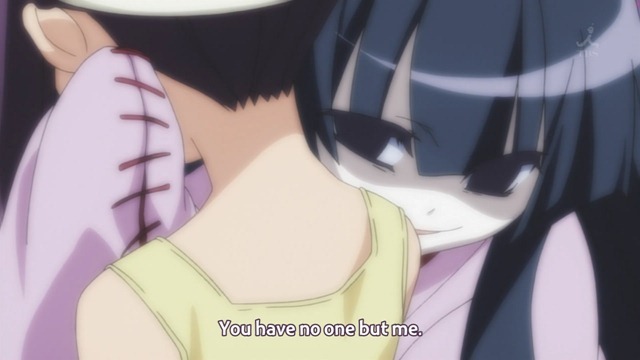 Minato immediately gets swallowed up into the dark dreamworld with evil Rika-chama. As if the straightjacket yukata wasn’t a giveaway, it doesn’t take long for evil Rika-chama to start putting the moves on Minato. There’s no yuri like loli yuri. 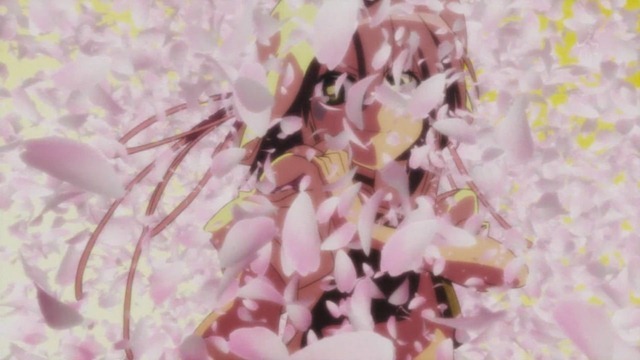 But luckily for Minato’s dreamworld virginity, Merry shows up with a sparklingly CGI flourish of sakura blossoms. Non-animation aside, the show’s designs and color schemes continue to impress. It’s like looking into a pretty, yet dark, twisted painting. I also really liked the music they used during various scenes in the show. From darker strings during the more forboding sections to the whimsical woodwinds when Merry shows up. It’s really nice. 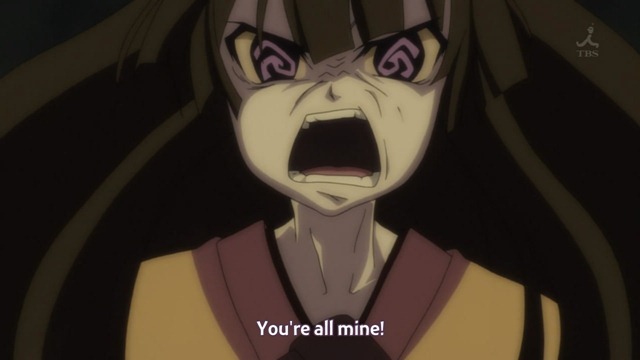 Not surprisingly evil Rika-chama goes nuts and tries to take Minato by force, but she’s stopped by both Merry and Yumeji, who surprises Merry by finding a way into Minato’s dreamworld. A few CGI bowling pins and a bitch slap later and the fight is done. Evil Rika-chama recedes back into the dreamworld and mini Ika Musume is safe, although she brushes off the whole evil Rika-chama incident as a dream.

The episode leaves us with a scene shift in which a couple dream demons appear to go at it. I won’t even bother trying to figure out what’s going on. 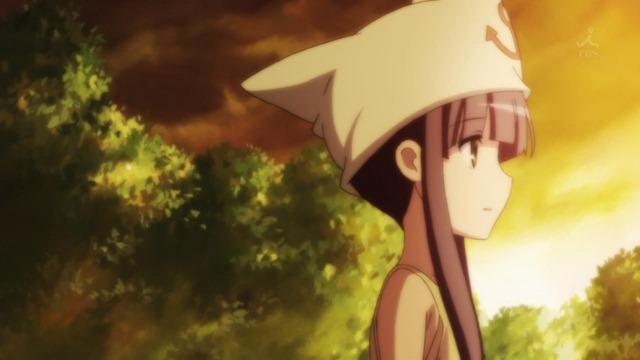 Even though mini Ika Musume is probably a character never to be seen again, this episode did a good job developing the characters and raising some questions. Both Merry and Yumeji feel pretty well rounded to me. I don’t get the impression that either are fitting into neat character stereotypes. Merry is dynamic, sure she has her cute moments, but they don’t play it up much, she has a lot of depth to her. Strong but vulnerable, stubborn but realistic. Meanwhile, Yumeji is a pretty level headed guy. He responds to situations, maybe not how a shounen hero would, but how you’d expect an intelligent, proactive guy to do so. Perhaps he’s been taking lessons from Isana’s dad.

On the questions front, does mini Ika Musume no longer remember Ichika at all except as a dream? Or does she start wondering later why Ichika disappeared? And what’s to keep Ichika from coming back? It seems there’s two ways to be taken over – willingly like Yumi was, or by force, like how Yumeji almost was. But perhaps the weaker demons can’t easily take a human by force. YK is going in the right direction.

4 Replies to “Yumekui Merry, episode 3: Merry in the Sky with Donuts”