Keeps the donuts away.

In a 13 episode show, right around the 4th episode, you get a sense of whether a show has enough substance to keep it going strong. The bad shows have already revealed their true colors. The average shows become dramatically less interesting. The good shows maintain the quality or even tick it up a slight notch. The great ones take off like a rocket. Yumekui so far feels like a good show. The dreamworld is becoming more interesting, good questions are being raised and characters are starting to distinguish themselves.

I feel like Merry isn’t moebait. I’d be interested in hearing other people’s thoughts on this. I realize she’s designed like a Touhou character, sporting the thigh highs, the camera has a tendency to ogle her midriff, she’s got dat fang, and she even ended the episode in a maid uniform (albeit the ugliest maid uniform I’ve ever seen), but she doesn’t seem like a moe pandering character. I’m not sure exactly why, because if there was a checklist she’d probably check most of those boxes. Maybe some credit’s due to newb seiyuu, Ayane Sakura (who’s birthday is actually the 29th, happy birthday!), who hasn’t give Merry the typical cutesy soft moe voice. If you gave me Shana and you gave me Merry. I’d say Shana is way more moebait than Merry. But I can’t figure out why I think that way.

Isana is just a ridiculously nice person. The kind that doesn’t exist in real life. I mean, does anyone speak like this? I’ve decided I’m going to be friends with you, she tells the former-spineless-harem-male-lead-turned-dirty-fratboy possessed Chizuru. You see this all the time in anime, but that would freak you out in real life, no? Then again, maybe I’ve just been hanging with all the wrong people.

Interesting that Yumeji was able to notice his friend Mei’s descent into vesselship through the shape of her pupils. I’d been wondering if Merry’s rectangle pupils were just part of her design, but it seems that indicates some sort of possessive state. What else was interesting was seeing Mei’s internal graffiti. A big contrast to the blackness we saw from Minato and all the previous episodes. Minato’s blackness signaled an upcoming dream, but Mei’s neon slashes seemed to indicate something more sinister, or perhaps not?

Even though we eventually learned that Chris Evergreen (lol, these names) only intended to meet Chizuru and not steal her body, I think it’s completely understandable why Yumeji jumped headlong into this fight. Of course, it would’ve been nice if he entered the fight with a plan that wasn’t just rush the demon and get knocked into oblivion, and but hey, give a guy some points for trying. The more bigger snafu was leaving the house without taking the 2 seconds to yell at Merry to come join the fun. One, they’re working together. She needs to find a way back to the dreamworld, so if he’s going to tussle with some demons, she should be there. Two, she’s obviously the brawn in this relationship. But going back to Mei’s neon slashes, I suppose that means different colors indicate different types of dreams or intents. Black means potential hostile takeover. Neon slashes means they want to get Shakespeare on you. But I’m glad that Chris didn’t take over Mei as a vessel. Because that once you go vessel, you never go back consequence has is a pretty major break. If Yumeji and Merry can start reversing that, then the risk is gone, and the show becomes less interesting. I think the idea of being unable to save someone is an idea that needs to be explored more in anime. 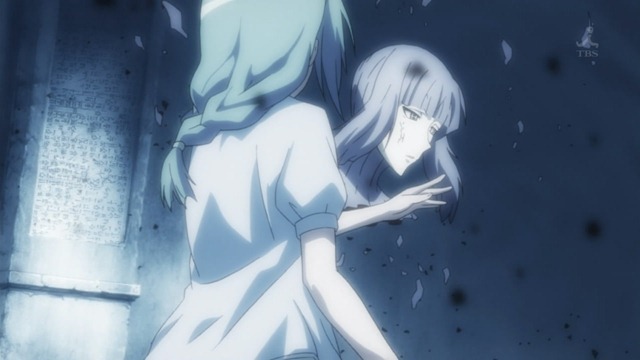 Chris wanting to get to the other side raises some questions as to why these dream demons keep getting stuck in the human world. Merry seems to be the only one to have broken through to the physical world. But I imagine she’s the same sort of creature. Somehow she needs to get back to the ether. But if she’s sending dreams back by defeating them, maybe that means she needs to be defeated herself?