Well, it took until a season and a half, but Bakuman finally gives a for real, I shit you not episode that’s almost completely romance-free and thus funny and interesting the whole way through. For those that have hung on for the ride, this is your reward.

It’s an interesting strategy for the JACK editors to have not only Mashiro support Nizuma, but also Fukuda, the guy who finished second to Nizuma in the last two Tezuka Award. Personally, I would think sticking three rivals in a room together would lead to complete sabotage, but thankfully everyone is able to keep a level head, if not their pride. Fukuda is brash and snarky, he brings a traditionally smart-ass, cocky attitude that Bakuman has been desperately missing. Nice guys may be all fine and good as harem leaders, but we really needed someone to stir the pot. But at the same time, he’s not a bad guy. He’s likeable in the sort of way… Accelerator is (the white hair, the comparison was inevitable). He’s cocky enough to challenge Nizuma which ends up helping Nizuma quite a bit. 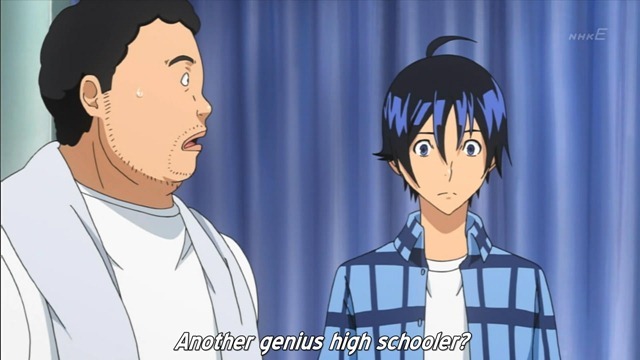 But everyone loves Nizuma aside, perhaps the most interesting character was Nakai. We’ve seen him in previous eps, but this is the first time we got a chance to learn more about him. 33 years old, never won an award, hasn’t been published in 10 years. Has tremendous drawing skills, but apparently he walked onto the set of America’s Next Top Models – Japanese mangaka edition, and finds himself as an assistant to 16-year old prodigy, Nizuma, and flanked by an even younger Mashiro, as well as a still-teenaged Fukuda. I’m not at the age where I feel like the "kids" are running circles around me, outright disrespecting me, but I could empathize with him.

As Nakai admits, it’d be all well and good if he was just satisfied with being an assistant, except he still harbors dreams of becoming a Mangaka. Fukuda needles him because of this. Nakai wants to be a mangaka, but spends all his time being an assistant, and not creating anything on his own. It’s like he’s Mashiro’s uncle, except without having any experience of success. It’s the dark side to the ganbatte! chasing your dreams story. In reality, most dreams do not get fulfilled. Speaking of which, I’m still fine with seeing Mashiro fail at the end.

The episode also did a nice job giving more depth to Nizuma, beyond his non-stop hyperactive, screaming fits. I thought it was really interesting seeing how Mashiro tries to learn from Nizuma, only to realize that the way Nizuma thinks and sees manga is so unique that he can’t keep up. That’s prodigy for you. But at the same time, Nizuma eases on his prior cockiness and stubbornness and displays that he’s more than willing to listen and take advice, and even start doing things he’d rather not, like writing names.

These are all very likeable guys (except for MihoMashiro, although Mashiro is ok), interesting guys, so just watching them talk and interact like we were flies in the room was pretty darn interesting.