To some degree, I feel like JC Staff is still holding back Yumekui Merry in some ways (maybe the shittastic animation quality of this episode), but I give director Shigeyasu Yamauchi a lot of credit for successfully transitioning the show from typical JC Staff fantasy/monster-of-the-week fare to a much more darker show that explores the morally gray. 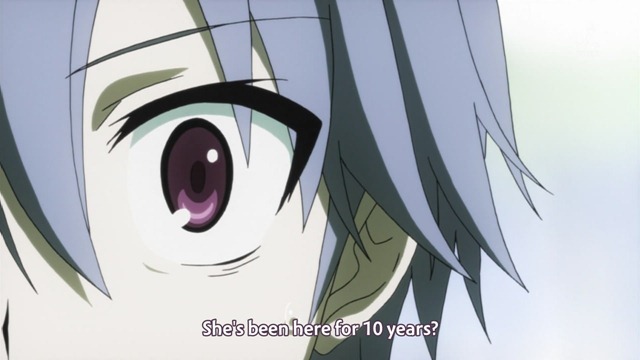 I liked the way the show just tossed out the revelation that Merry’s been stuck, fighting dream demons, in the real world for over 10 years. When she pointed at the sign, I initially thought seasonal sales. So I figured 2-3 years, but Yumeji took it literally and counted up the summer sales that Merry’s been around for. Since no one corrected him, I guess he was right. Which is pretty amazing, because based on what we saw in the first episode, I was under the impression that she just recently found herself in the real world. Of course, this also means Merry’s most likely over 18 and probably over 21, if not a couple thousand years old. How convenient. 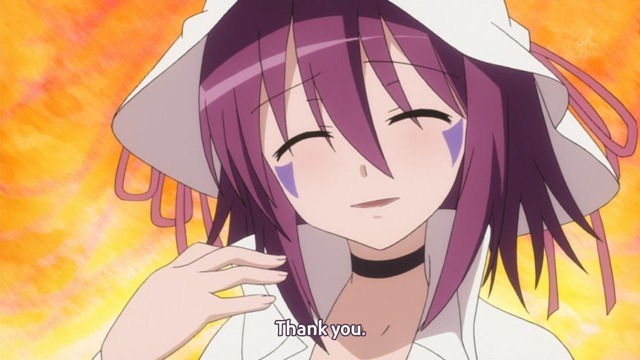 One thing that’s refreshing about Merry is that she’s really, really well adjusted. When Yumeji feels sorry for her, she brushes the pity off her shoulder and just thanks him for helping her to alter her path. And then reminds him of his commitment to her. She doesn’t get emo about it, she doesn’t get stereotypically tsuntsun about it, there’s no URUCHAI! URUCHAI! URUCHAI! She responds like a normal human being. It’s hard not to love that, because strangely enough it seems so rare to see.

Engi or Play, was the sword-wielding angel dream demon who we saw at the end of the third episode. She’s after revenge for her sister who left the dream world to reality, and apparently met her demise at a demon named Pharoth Elcreth’s hands. She convinces a high-schooler named Yui, who’s almost a splitting personality image of her lost sister, to become her vessel, and happens to track down Merry.

Play either has it all wrong and thinks Merry is Pharoth for some reason, or Merry’s been suffering from some amnesia. Either way, Play’s stab first, ask question later style leads to a dramatic shift in visual style as the two square off. Although the action was actually pretty good, and much better than the close-cropped shots we’ve seen from the previous episodes, the complete and utter lack of detail in the scenes makes me weep for the apparent lack of budget. I didn’t mind the visual style with the washed out colors. But it’s clearly obvious that one of the reasons they did this was because they don’t have the money to go BONES-out for their action scenes. I bet the BR version looks much, much better.

The small revelation was that Merry’s been stuck in the real world for 10+ years. The bigger revelation was that all those dream demons she thought she was helping or sending back to the dream world was false. At least according to Play. Still waiting for her to stop trying to cut down Merry and reveal her sources. But the knowledge stuns Merry, as she thinks back on how she watched Chris Evergreen go with a smile, only to realize that instead of sending him back home, she likely sent him to some awful state of purgatory.

As Merry is dazed by Play’s revelation (would’ve been better if she could’ve kept her wits about her instead of going into total zombie mode though), Yumeji steps up and out of the Yuuji role of helpless observer and almost to the Saito role of hero, as he steps in between Play’s death blow to save Merry, before the camera cuts out on a cliffhanger. Let’s call this better than Yuuji, not as cool as Saito level, the Emiya Shirou level. Except unlike Shirou, who was an annoying prick, Yumeji doesn’t believe that all women should do is stay in the kitchen, clean after the boys and make babies.

A plus episode that picks up the intensity from the first third of the season. It’s going to be interesting to see how Merry’s approach changes once she overcomes Play and nurses Yumeji back to health. Embrace the darkness Yumekui Merry. Batman needs a sidekick, I hear.