Jintan’s not so special anymore. Everyone can see “Menma”. Well, you know what? I can see her too.

Menma persuades Jintan to go to school by saying that it might be her wish for him to go. He goes but ends up skipping it when he hears the snide remarks made by Anaru’s friends. He goes to the hideout and Poppo tells him that he spotted Menma the previous night. When asked about her whereabouts, Menma replies that she never left the house. Can there really be two Menmas?

When Jintan gets home he finds Menma in the kitchen making muffins. The muffins invoke a flashback about Jintan’s mom for Jintan and we find that his relationship with his mom was slightly shaky. She passed away when Jintan was still young. Obviously, the muffins that Menma makes don’t look or taste as good as the ones that Jintan’s mother used to make for the group when they were young.

Poppo gathers the group together for a barbeque and a search party for Menma. I find it funny that when everyone is supposed to bring food, it ends up being only the guys bringing food. The girls bring random things like fireworks and candles (for a séance).

Yukiatsu appears later and tells everyone he saw Menma by the stream as he was walking up to the hideout. This is surprising since Menma never left Jintan’s side during the barbeque. Yukiatsu really seems to hate Jintan by challenging Jintan in saying that Jintan’s not the only special person who can see Menma.

Nothing much really happened in this episode. More of Jintan’s past is uncovered and it makes me wonder how his mother’s death has affected him. Anaru and Tsuruko’s relationship didn’t seem to improve either, but Anaru is seen opening up to Tsuruko. I really enjoyed the lighthearted music during the barbeque setup scene. It fondly recalled memories of summer barbeques with friends.

Everyone goes down to search for Menma except for Yukiatsu and fail to find her. Anaru asks Jintan if he really liked Menma. She suspects that the reason Jintan can see her is because he liked her. Anaru brings up a decent point, but I doubt that it’s true since it seems like Yukiatsu also had feelings for Menma as well, though there is no proof of that at the moment. 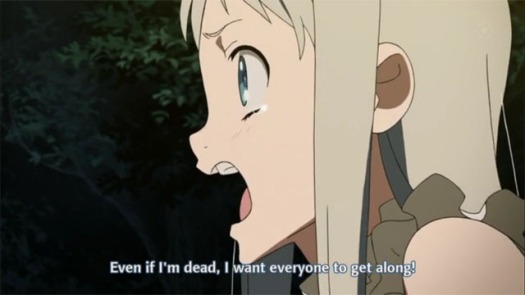 Upon their return Yukiatsu tells them that “Menma” said to not make a big fuss about her wish. Menma yells in disagreement to what Yukiatsu had said. She says that she’s happy that they’re all together again and wishes they got along. Everyone else, except Jintan being the only person who can hear Menma, agrees that they should probably give up if that is what “Menma” really wants. Jintan desperately tries to convey Menma’s feelings to the others by showing and telling them the muffins she made. Yukiatsu cracks up at this and ridicules Jintan. Jintan ignores what he says and tells everyone Menma’s true feelings.

We see that Menma has an effect on Jintan. As Jintan’s father leaves for work, Menma shouts out “itterashai”and Jintan follows in suit. Jintan’s father stops short and looks back at Jintan. He smiles and happily replies, “ittekimasu” before leaving. Jintan is slowly changing.

Tsuruko visits and says that she has a request for him. She also tells him that she thought his statement about Menma making the muffins was bullshit.

Jintan waits for Yukiatsu somewhere and intentionally angers Yukiatsu. Jintan claims that his Menma says Yukiatsu’s “Menma” is a fake. Yukiatsu angrily says to not speak with him in a friendly tone and that he never acknowledged Jintan’s position as leader in the past. When Yukiatsu returns home, he opens his closet and says that he will show Jintan his “Menma”.

The group convenes for unknown reasons at the hideout. When Poppo uses the bathroom, he suddenly comes rushing back saying how he saw “Menma” in the woods. The group gives chase. When they can’t find “Menma”, Tsuruko, who seems to know what is really going on, yells aloud Yukiatsu’s name. Knowing that his identity has been revealed, Yukiatsu runs for it and the wig falls. When everyone catches up, they find Yukiatsu sitting on the ground looking down ashamed.

There was a lot more action in this episode than the previous. “Menma” is revealed to be Yukiatsu dressing up in Menma’s dress. I find it freaky that he owns a dress (in his size too!) that looks similar to Menma’s. I’m not going to question his fetishes.

I’m not sure if other viewers feel this way, but my roommate found it annoying that Jintan never asked Menma to prove that she was there with them. She has a valid point since Menma can move physical things around. Other people can feel her weight when she touches them. I can see where she’s coming from, but I think Jintan would have acted way out of character if he did such a thing.

So far I am enjoying this series, although I find the characters more interesting than the storyline. Yukiatsu, though he’s a douche, is probably the most interesting character. Because I don’t know why he acts the way he does, I am drawn to him. Plus, doesn’t the picture above look like the others are passing judgement on him? This doesn’t mean the other characters are boring because they are far from that. I have great hopes for this series. The preview for the next episode doesn’t seem to be interesting, but I hope I’m wrong about that.