With each passing week, Sacred Seven keeps hovering around the line of mediocrity. Once more, its silly elements that are a joy to watch in their ridiculous glory are balanced by drama that isn’t all that compelling, and action that ends way too quickly. Unfortunately by now, the meido army gimmick has worn out its welcome as well. I’d hesitate to call Sacred Seven bad, but whenever it takes a minute to actually make itself appealing, it seems to cower from the idea of success and curl up with its security blanket of boring clichés.

So it’s the day of school festival preparations, and Alma’s all over that shit like a fly on fly paper. Ruri’s in charge, which naturally means that a Dark Stone will show up and generally just be a nuisance while Makoto and Alma go around trying to kill it. And it does make a nuisance of itself, Alma lies to Ruri about why he wants to transform into his spiffy suit (To practice! During the school festival, where nobody should see him! How believable.), she buys into it like the dumb bint that she is, and the collective IQ of the audience drops another 20 points.

Nobody seems to find it strange that a butler is zipping around in a goofy looking robot, or a supposed hardass is running around in a fruity suit, except three boys painting a sign, who all practically scream “We’re being dicks to this guy who could kill us because the plot demands it!”

Before Alma can realize how stupid he looks, the Dark Stone interferes by turning the rail that the boys are leaning on to heckle Alma to stone. Of course, as logical as this show is, it breaks like it’s made of cracker crumbs and two of the three somehow make it down without hurting themselves. A lone nerd asks them why they left the third one up, and they can’t even formulate a coherent response. Seriously, they don’t answer, like the show’s creators wanted to make themselves seem self aware of how little sense this makes.

Alma holds the now collapsing sign up while the third boy hangs from his jean leg about to fall down. Choosing between the two, Alma grabs for the boy while Makoto appears out of nowhere to prop the sign up. With a parting message and some gushing farewells  from the three delinquents, Makoto and Alma head over to destroy the Dark Stone. Alma loses his powers after Ruri’s gem gives out, but it has no consequence since Makoto throws the Dark Stone up into the stratosphere, where it somehow explodes into fireworks. 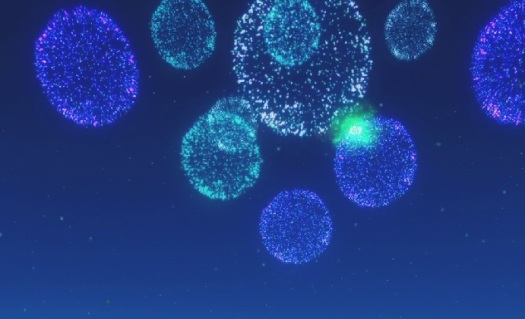 The two apologize for deceiving Ruri, the geology exhibit turns out to have gone well (Oh good, now we can finally rest easy), and the rest of the festival goes off without a hitch.

Words cannot express how mind numbingly stupid this show is. Not even in a gleeful way, in a way that makes you scream at the screen for the characters to either wise up or step down from positions of power. I’d list several examples, but I think I did a good job of that earlier. It’s no longer a sense of camp that compels it, but a sense of trying to get itself taken seriously while having all the elements necessary for something to fail colossally at that. For every episode or decent action sequence that adds to the plot, you have dozens of instances that just don’t help whatsoever. As it stands, if it wants itself taken seriously, Sacred Seven has no room to faff about as much as it has been doing.