True to his words in episode 1, Taichi got the entire class to ignore Chihaya. She doesn’t mind the mistreatment and tells Taichi that he shouldn’t be mean to Arata. She blurts out how great Arata is at karuta and could beat the entire class. Taichi takes on this challenge and says that it shall be settled at the upcoming karuta tournament.

Both Taichi and Arata perform exceptionally well in the beginning rounds. They are listed as finalists and are to play against each other. Unsettled by Arata’s good performance, Taichi plays a prank on him. He shakes a can of soda and throws it to the unsuspecting Arata, who then opens it and is sprayed in the face. As Arata is washing his face, Taichi steals Arata’s glasses. Chihaya runs off to look for Arata’s glasses.

During their final game, Taichi is surprised by Arata’s continued good performance. He then realizes that Arata has already memorized the card’s positions prior to the start of the game. Taichi then switches up the cards to assure his victory. Confused, Arata begins to waver and loses several cards to Taichi.

Chihaya then appears out of nowhere and pushes Arata away. She asks if she could play in Arata’s place because he is missing his glasses. Taichi allows it because he believes that he can beat Chihaya without a problem. However, Chihaya has a trick up her sleeve. She follows Taichi’s movements and swipes out a bunch of cards, one of which is the correct card, before Taichi can grab it. Taichi, feeling the pressure, begins to play more seriously. 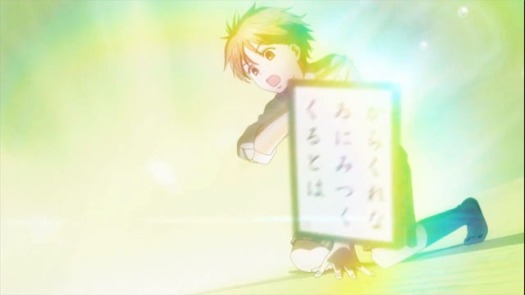 At the climax, both need one more card to win. Chihaya doesn’t recognize any of the cards at first glance, but then realizes that one of the cards on Taichi’s side is a “Chihaya” card. As the announcer reads the poem for the last card, Chihaya begins to feel “different”, or as I would call it “warm and fuzzy inside”. This is the first time she feels truly connected to karuta. In the end, Chihaya is announced the winner for the sixth grade class and receives a certificate. 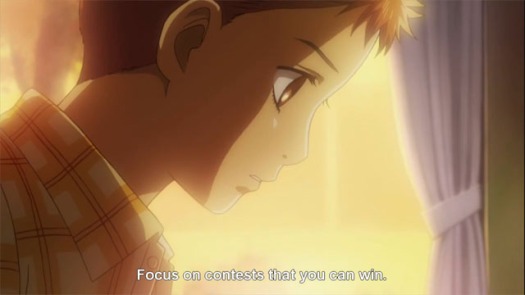 This is where it is supposed to end all happy for everyone, but it doesn’t. Taichi’s mother (aka Mrs. Pressure) lectures Taichi. She says that because Taichi lost the karuta game, she now can’t show the video to his father. She tells him that he’s good at other things like academics and sports, so he shouldn’t bother with things that he can’t win in.

Chihaya is extremely pleased with her accomplishments and calls home to tell her mom about it. Her mom doesn’t listen because she is too happy that her other daughter is currently being scouted by an agent. When Chihaya’s sister gets on the phone, she says that karuta is “lame and boring” completely ignoring her younger sister’s achievement.

Chihaya and Taichi somehow bump into each other and walk around the school. They find Arata, who still doesn’t have his glasses, playing karuta on the floor of an empty classroom. Chihaya sees his dedication and runs off to try to find his glasses again. Taichi feels remorseful and returns the stolen glasses to Arata. The two make up and search for Chihaya.

I loved the background music for this episode. It was simple and brought out the emotions of each character. It was important that the music did so because this episode focused a lot on the children’s emotions and their troubles with their families. We see Taichi being pressured by his mother to be the best at everything he does. As for Chihaya, she is being outshone by her sister. Chihaya’s accomplishments amount to nothing in the eyes of her family. This episode delicately and realistically displayed the problems that children face. This episode ended very nicely with the picture of the trio on the autumn leaves.